Vancouver, Wash. – On March 11, 2018, the Vancouver Police Department took a report of a missing person, Ashanti A. Conde, DOB: 8-1-1990. Ms. Conde’s family reported they had not seen her for a few weeks. Through the course of the Vancouver Police Department investigation, it was determined that Ashanti Conde was last seen alive on February 22, 2018, in the area of Brush Prairie, WA., with a subject identified as Michael Conley. Michael Conley was reported missing on February 27, 2018.

Mr. Conley and Ms. Conde left Brush Prairie area on the evening of February 22, 2018, in a Cadillac Sedan. This was the last time they were seen alive. According to Skamania Co. Sheriff’s Office reports, witnesses observed the Cadillac sedan crashed in a rural area in Skamania County just north of the Dougan Falls area on February 24, 2018; at this time, the vehicle was covered in snow; however, no one appeared to be in the vehicle.

On March 9, 2018, Michael Conley’s body was recovered near the Cadillac sedan with no signs of foul play observed. Clark County Search and Rescue conducted a search of the area around the vehicle; Ms. Conde’s remains were not located at that time.

Multiple tips were received throughout the investigation that proved fruitless and multiple searches were conducted in a variety of locations throughout SW Washington.

On September 26, 2021, the Skamania County Sheriff’s Office, in coordination with the Clark County Sheriff’s Office Search and Rescue Team and other teams, searched the area again around where the Cadillac sedan was recovered. During this search, human remains were located in a very rugged, and steep area near the sedan location. The remains were sent to a private lab for positive identification.

On March 31, 2022, Vancouver Police were notified by the lab that the remains were those of Ashanti Conde. With the positive identification and recovery of her remains, the Vancouver Police Department has closed the missing person case on Ms. Conde.

Rachel Rutherford has been located safe.

Vancouver, Wash. –On March 29, 2022, at 4:35 p.m., several witnesses called to report a vehicle versus pedestrian collision at E Fourth Plain Blvd./Todd Road. The victim, a 56-year-old female, was struck in the middle of the crosswalk by a vehicle that failed to yield and failed to stop after the collision. The victim had the signal lights illuminated and several other vehicles had already stopped for the crossing. The suspect vehicle was described as a metallic silver or blue Honda Pilot that continued eastbound after striking the pedestrian. The victim suffered multiple injuries and was transported to an area hospital for treatment.

The suspect vehicle was located at the residence in Vancouver and Bradley Kintin, 20 years of age, was arrested and booked into the Clark County Jail for Vehicular Assault and Hit and Run Injury. 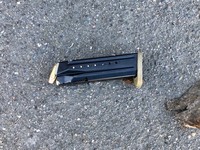 Vancouver, Wash. –On March 19, 2022, at approximately 5:37 p.m. a robbery occurred at a Kohl’s located outside the city limits at (9312 NE 5th Ave.). The suspects fled the location in a stolen vehicle and deputies from the Clark County Sheriff’s Office spotted the suspect vehicle on I-5 southbound. The pursuit of the suspect vehicle continued into the city limits and officers from the Vancouver Police Department also entered the pursuit. In the area of 2600 Fairmount Avenue, a Clark County Sheriff’s Deputy reported that two rounds had been fired at his vehicle from the suspect vehicle. The deputy was not injured. The suspect vehicle lost control and crashed into a PUD pole in the area of E 33rd St./Watson Ave. All occupants of the vehicle were detained by police and the driver and front passenger were both arrested and booked into the Clark County Jail. A firearm was thrown out of the suspect vehicle after the shooting and both the firearm and shell casings were recovered by Vancouver Police.

Joshua T. Young was arrested and booked into the Clark County Jail on the following charges:

No additional information is available at this time.