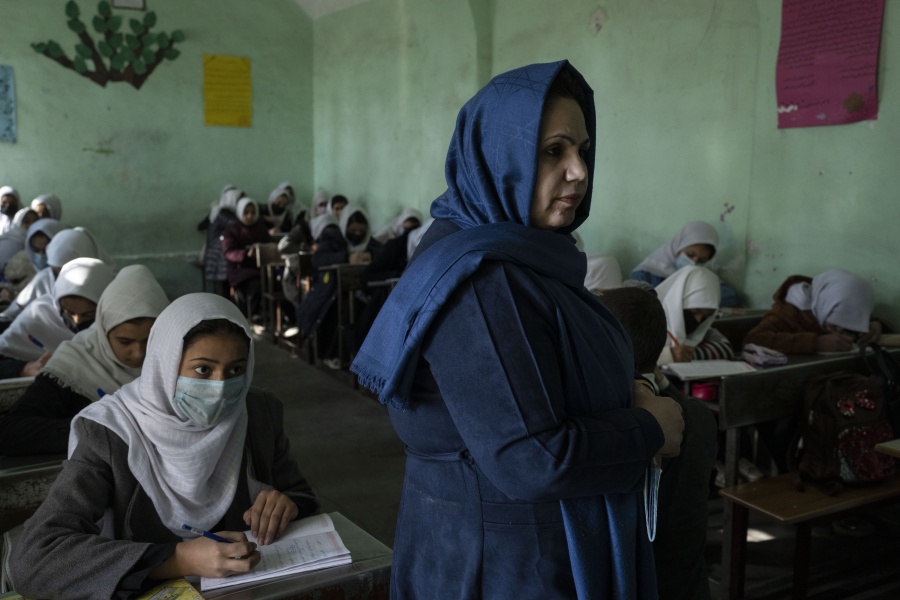 HERAT, Afghanistan — High school girls are sitting at home almost everywhere in Afghanistan, forbidden to attend class by the Taliban rulers. But there’s one major exception.

For weeks, girls in the western province of Herat have been back in high school classrooms — the fruit of a unique, concerted effort by teachers and parents to persuade local Taliban administrators to allow them to reopen.

Taliban officials never formally approved the reopening after the lobbying campaign, but they also didn’t prevent it either when teachers and parents started classes on their own in early October.

“Parents, students and teachers joined hand in hand to do this,” said Mohammed Saber Meshaal, the head of the Herat teachers’ union who helped organize the campaign. “This is the only place where community activists and teachers took the risk of staying and talking to the Taliban.”

The success in Herat highlights a significant difference in the Taliban’s current rule over Afghanistan from their previous one in the late 1990s. Back then, the militants were uncompromising in their hard-line ideology, banning women from public life and work and barring all girls from education. They used force and brutal punishments to enforce the rules.

This time, they appear to recognize they cannot be as ruthless in an Afghanistan that has changed dramatically in the past 20 years. They have imposed some old rules but have been ambiguous about what is allowed and what is not. The ambiguity might aim to avoid alienating the public as the Taliban wrestle with a near-total economic collapse, a shutdown in international funding, an alarming rise in hunger and a dangerous insurgency by Islamic State group militants.

That has left small margins where Afghans can try to push back.

When the Taliban seized power in August, most schools were closed because of COVID-19. Under heavy international pressure, the Taliban soon reopened schools for girls in grades one to six, along with boys’ schools at all levels.

But they have not allowed girls in grades seven to 12 to return, saying they must first ensure classes are held in an “Islamic manner.” The Taliban also barred most women from government jobs, their largest place of employment.

In Herat province, however, teachers quickly began to organize.

“When the Taliban came, we were very worried, because of everything before,” said Basira Basiratkhah, principal of the Tajrobawai Girls School in Herat, the provincial capital.

Teachers union officials met with the Taliban governor and head of the education department. They didn’t raise issue of girls schools at first, focusing on building a relationship until “the Taliban came to see that we represent the community,” Meshaal said.

When teachers did ask for a reopening, Taliban officials balked, saying they could not allow it without an order from the government in Kabul.

The teachers kept pressing. About 40 female principals, including Basiratkhah, met with senior Taliban education officials in September to address their main concerns.

“We assured them that the classes are segregated, with only women teachers, and the girls wear proper hijab,” Basiratkhah said. “We don’t need to change anything. We are Muslims and we already observe everything Islam requires.”

By October, the teachers felt they had the Taliban’s tacit agreement not to stand in the way. Teachers began spreading the word on Facebook pages and messaging app channels that girls’ high schools would reopen Oct. 3. Parents created a telephone chain to pass along the news, and students told classmates.

Mastoura, who has two daughters attending Tajrobawai in the first and eighth grades, called other parents, urging them to bring their girls to school. Some worried the Taliban would harass the girls or that militants might attack. Mastoura and other women still escort their daughters to school daily.

“We had concerns, and we have them still,” said Mastoura, who like many Afghans uses one name. “But daughters must get an education. Without education, your life is held back.”

Fadieh Ismailzadeh, a 14-year-old in the ninth grade, said she cried with happiness at the news. “We had lost all hope that schools would reopen,” she said.

Not all the students showed up when the doors opened at Tajrobawai. But as parents became more confident, classes filled after a few days, Basiratkhah said. About 3,900 students are in grades one to 12.

On a recent day, girls in a 10th-grade chemistry class took notes as a teacher explained the elements that make up water. Lines of younger students marched through the halls to the schoolyard.

Shehabeddin Saqeb, the Taliban education director for Herat province, insists the group has no problem with girls going to school.

“We openly tell everyone that they should come to school,” he told The Associated Press. “The schools are open without any problem. We never issued any official order saying high-school aged girls should not go to school.”

Herat is the only place where girls’ high schools are open across the province, although schools also have reopened in a few individual districts in northern Afghanistan, including the city of Mazar-e Sharif.

Meshaal pointed to changes within the Taliban, saying some factions are more open. “They understand that people will resist on the subject of education.”

He said the Taliban are not corrupt, unlike the ousted, internationally backed government.

“With the previous government, if we proposed something for the good of the schools, they would throw the idea into the trash because they couldn’t profit from it,” he said.

“The Taliban spent all their time in the mountains fighting. They don’t know administration. So when we meet them, we try to give them advice and, after negotiations, they start to come around,” he said.

Still, teachers are struggling. Like other government employees, they have not been paid for months. The education department has not provided funding for other needs like maintenance and supplies, Meshaal said. And the opening of girls’ high school in Herat remains an exception. Other parts of the country have had less success.

Teachers in the southern city of Kandahar approached local Taliban officials about reopening girls’ high schools but were refused, said Fahima Popal, principal of Hino No. 1 High School for girls. Officials said they could do nothing without orders from the central Education Ministry. In the meantime, Popal said parents have been asking her when their daughters can return to class.

“We hope that one day we’ll have good news for them,” Popal said. But she said she believes it is better to wait for the central government to act rather than repeat the Herat experiment. If provincial authorities allow a reopening, the ministry could reverse their decision, which “would hurt students and teachers,” she said.

A full return of girls is a top demand of the international community and likely must take place before U.N. agencies will agree to pay teachers’ salaries directly.

So far, the Taliban have refused to set a timetable and most schools are starting a winter break until March. In a speech Saturday, Taliban Prime Minister Mohammed Hassan Akhund insisted “women are already getting an education,” adding only: “There is hope to broaden it, as God allows.”