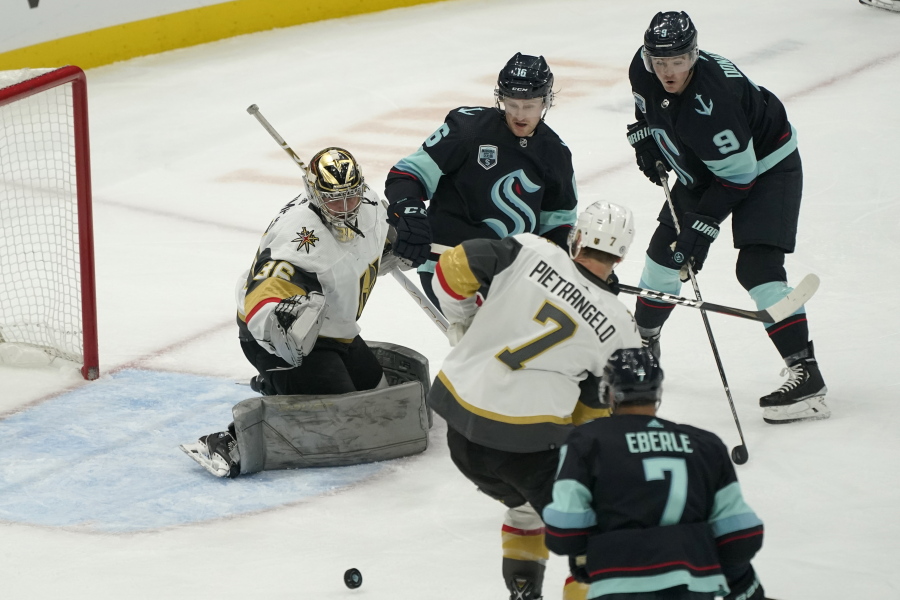 SEATTLE — Shea Theodore scored in the second period just moments after stepping out of the penalty box, and goalie Logan Thompson made 23 saves for his first shutout of the season, leading the Vegas Golden Knights to a 3-0 win over the Seattle Kraken on Wednesday night.

Michael Amadio also scored for Vegas, which is trying to stay in the chase for one of the last Western Conference playoff spots. Jonathan Marchessault added an empty-net goal with 26 seconds left, his team-high 26th goal of the season.

Theodore had just come out of the box after serving two minutes for high sticking early in the second. As he was moving across the ice, Seattle’s Victor Rask turned the puck over to Vegas’ Jonas Rondbjerg, who got it ahead to Theodore, who then in one-on-one against Driedger and lifted over the goalie’s glove into the right side of the net at the 7:38 mark.

Theodore’s goal was his ninth of the season.

Amodio doubled the lead to 2-0 at 7:03 of the third. On a goalmouth scramble, he reached out with his stick for a rebound was he was falling to the ice. Amodio sent the puck toward the net, and it deflected in off the skate of Kraken defender Adam Larsson.

The Kraken thought they were on the board with 2:21 left in the game when Jordan Eberle put the puck in off a rebound. But Vegas challenged, and after a video review the play was ruled offside.

The shutout was the third of the season for the Golden Knights. Seattle was blanked for the fourth time, including three times on home ice.

NOTES: Golden Knights defenseman Brayden McNabb was back in action, getting the start after missing the last 13 games because of an upper body injury. His last game was March 3 against Boston. … Chris Driedger made his second straight start in goal for Seattle, just the third time this season he has started consecutive games. He had a shutout stretch of 82 minutes, 14 seconds end on Theodore’s goal. … … Theodore’s goal was his 39th point of the season, giving him the lead among the Vegas defensemen. … Golden Knights right winger Evgenii Dadonov played in his 400th NHL game.

UP NEXT: The Golden Knights and Kraken play the second of a two-game set in Seattle on Friday night.