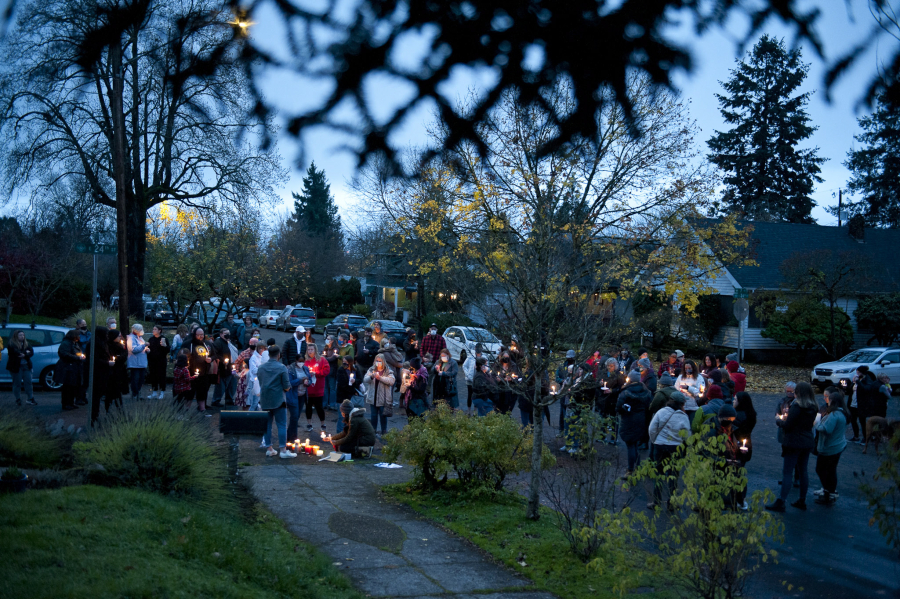 Michael and Monica “Star” Murrah had been recently discussing vaccinating their son, according to text messages on Michael Murrah’s phone, which was mysteriously sent to a courthouse mailbox over the weekend he allegedly stabbed his estranged wife to death, court records show.

During an interview with police after the Sunday, Nov. 7 fatal stabbing, Michael Murrah, 45, allegedly told officers he “wanted to take revenge on his wife and save their child,” a search warrant affidavit filed last week states.

The court document doesn’t contain the substance of the couple’s text message exchange.

When Clark County Superior Court Commissioner Carin Schienberg’s judicial assistant checked the commissioner’s mailbox on the morning of Monday, Nov. 8, there was a package inside that appeared to be a cellphone, according to the assistant’s written statement. She told police she did not know who delivered it and that it could’ve been sent Friday, Nov. 5. She wrote that there was also a note with a child’s name, possible teacher’s name and the passcode to the phone. She said the note also read, “review Star Murrah and Michael Murrah texts.”

Schienberg had denied Star Murrah’s petition for a full domestic violence protection order against Michael Murrah last year and was initially assigned to the couple’s divorce case. Court records filed in the divorce case show Michael Murrah had previously mentioned offering text messages between him and his estranged wife as evidence.

The judicial assistant turned the phone on and saw a conversation block with “Star Beast.” Michael Murrah had called Star Murrah “Star Beast” in police interviews, the affidavit states. The assistant said the last messages were about talking to doctors about vaccinating their son, who is now 9 years old, court records show.

When the judicial assistant searched court records for the name on the phone, she found the divorce case, which had a trial set for February in front of Superior Court Judge Robert Lewis. She also found the phone number was associated in court records with Michael Murrah. She wrote that she then turned off the phone and re-wrapped it. She said she was going to call Michael Murrah to ask him why he’d sent the phone and tell him to come pick it up, her statement reads.

She then wrote that she saw a criminal case in his name and that he was scheduled to appear in court on suspicion of first-degree murder. She wrote, “I now know this could be potential evidence in an extremely serious matter.”

Vancouver police responded around 10:30 a.m. Nov. 7 to the 2400 block of F Street in Vancouver’s Arnada neighborhood after a neighbor called 911 to report Star Murrah, 45, had been stabbed. Police found Michael Murrah outside of the house with what appeared to be blood on his hands and a knife, according to the affidavit.

Officers said he obeyed commands to drop the knife. Police did not see any injuries to Michael Murrah, court records state.

Star Murrah was found inside with multiple stab wounds to her upper torso, the affidavit states. She was taken to PeaceHealth Southwest Medical Center where she died from her injuries.

The neighbor told police that the couple’s son knocked on his door shouting, “Mommy needs help!” The neighbor came to the house and found Michael Murrah standing inside with a “bloody weapon in bloody hands,” according to the affidavit.

The neighbor yelled for him to “get out,” and Michael Murrah ran out the back door. The neighbor said he locked the doors and then found Star Murrah lying down, clutching a towel to her chest. He said she told him that Michael Murrah had cornered her in the bathroom and stabbed her. He said he stayed with her until police arrived, court records state.

Michael Murrah allegedly told police he stabbed someone called Star Beast “to fulfill a prophecy.” In another police interview, officers said Michael Murrah admitted to driving to Star Murrah’s house with a knife and a Bible, the affidavit said.

What to do if you’re a victim of domestic violence?

The best thing a victim or potential victim of domestic violence can do is to seek help as early as possible — even before the situation escalates to physical violence, Vancouver police Sgt. Deb Libbey said.

People can begin by contacting an advocate, such as a domestic violence hotline or a mental health counselor, Libbey said. Those resources could help address some common contributing causes, such as undiagnosed or untreated mental health issues or substance abuse.

“At YWCA Clark County, we believe that safety is a fundamental right,” the agency said in a Facebook post about Monica “Star” Murrah. “Everyone deserves to live in a safe and nonviolent environment, no matter what.”

He also told police that their son was inside the house, and Star Murrah was yelling to their son to get help, according to the affidavit.

Michael Murrah is scheduled to be arraigned on first-degree domestic violence murder today. Court records show prosecutors are seeking a sentence above the standard sentencing range because of the alleged domestic violence and the couple’s minor child being present. His bail is set at $2 million.