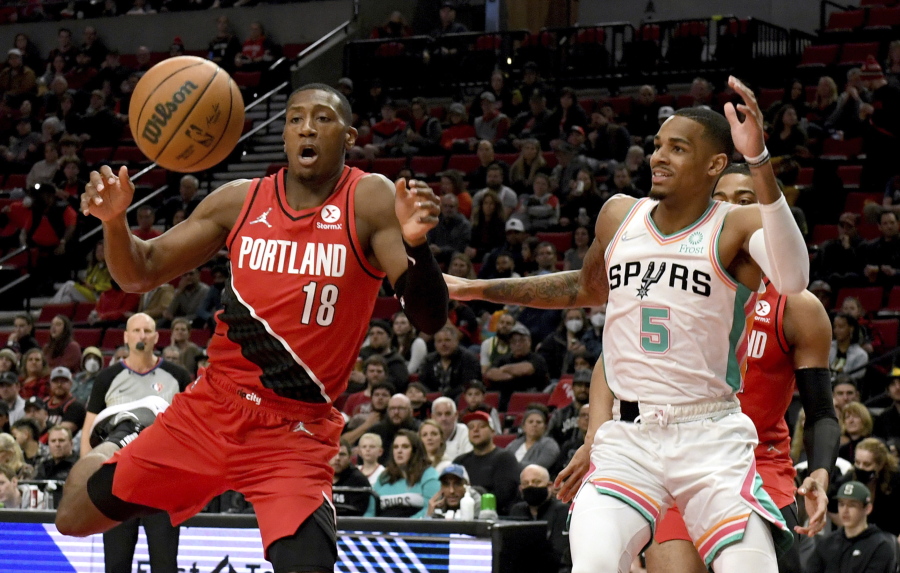 PORTLAND — Dejounte Murray had 28 points before sitting for the final quarter and the San Antonio Spurs routed the Portland Trail Blazers 133-96 on Wednesday night.

Keldon Johnson added 26 points for the Spurs, who are still in the mix for a play-in game in the Western Conference with three wins in their last five games.

The Spurs are 11th in the Western Conference, 11/2 games behind of New Orleans for the final play-in spot. They finished with 19 3-pointers, matching their season high and just one shy of the franchise record.

Ben McLemore had 23 points off the bench for the Trail Blazers. Portland has lost 10 of its last 13 games, but as coming off a victory Monday night at Detroit.

The Blazers are 11/2 games behind San Antonio and in the midst of a rebuild. Of the team’s starters at the beginning of the season, two are injured (Damian Lillard and Jusuf Nurkic) and three — including Lillard’s longtime backcourt partner CJ McCollum — were traded away before the February deadline.

San Antonio led by 22 in the first half, going into the break up 81-53. It was the most first-half points for the team this season. The Spurs had 13 3-pointers in the half, a new franchise record.

Murray was 7 of 7 from the floor and led all scorers with 20 first-half points. He finished with seven of the Spurs’ 34 assists.

San Antonio was without Lonnie Walker IV for the second straight game because of back spasms. The Spurs were coming off of a 110-108 victory Sunday over Golden State, which was playing without injured star Stephen Curry.

Spurs: Gregg Popovich was complimentary toward Drew Eubanks, who started his career with the Spurs but has played for the Blazers on a series of 10-day contracts since early February. “He’s done a lot of work the past few years and to see him get the opportunity is fantastic. He’s great teammate. Nobody works harder,” Popovich said. Eubanks finished with 20 points against his former team.

Trail Blazers: Justise Winslow left the game after just seven minutes with left calf tightness. … Portland dropped the first of the four-game series with the Spurs back in early December. The teams play twice more, on April 1 and 3 in San Antonio. … It was the first of a five-game homestand.

Trail Blazers host Houston for a back-to-back on Friday and Saturday.