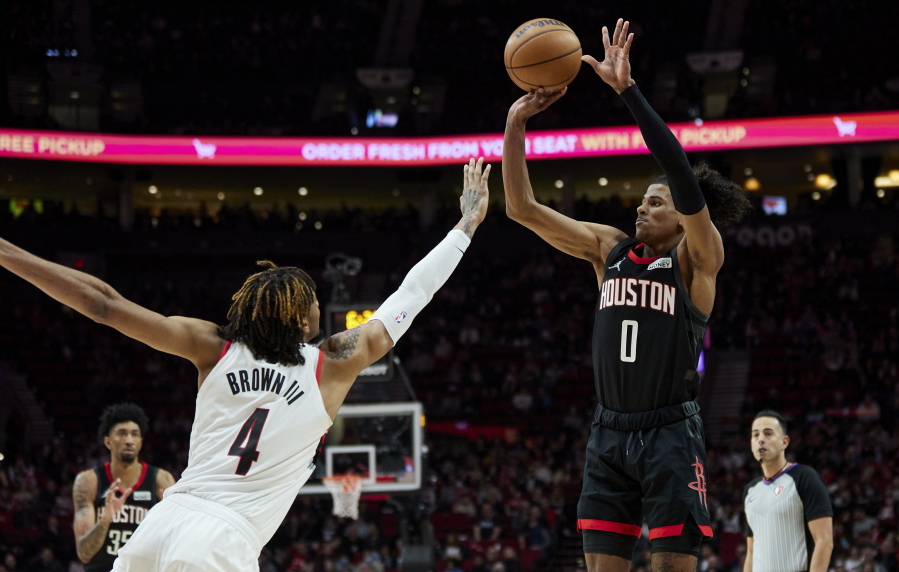 PORTLAND — Jalen Green had 23 points, including five 3-pointers, and the Houston Rockets built a big early lead before coasting to a 125-106 victory over the Portland Trail Blazers on Friday night.

It was the first of two games at the Moda Center against the Rockets on consecutive nights. Neither team is in the playoff picture.

Trendon Watford had 19 points for the Blazers, who have won just two of their last 14 games. They were coming off a blowout 133-96 loss to San Antonio on Wednesday.

The Blazers trailed by as many as 24 points, but closed within 93-82 late in the third quarter. The lead still prompted Houston coach Stephen Silas to sit most of his starters for the final quarter. Josh Christopher’s 3-pointer early in the fourth quarter pushed Houston back up 102-82.

Portland won the first two meetings of the season between the teams.

The Rockets, who have the NBA’s worst record, led by 18 points in the first quarter alone as Portland once again struggled. The Blazers are playing with a patchwork roster with Damian Lillard, Jusuf Nurkic and Anfernee Simons all sitting out with injuries. All three watched from the bench in street clothes.

KJ Martin dunked to give the Rockets a 49-32 lead and Houston went up 58-38 before the first half was over.

Watford led all scorers with 14 first-half points but the Blazers still trailed 66-53 at the break.

Rockets: Martin had 11 of his 13 first-half points in the second quarter alone. He finished with 16. … The Rockets have lost six of their last eight games. … The Rockets made 19 3-pointers. … Houston had seven players in double figures.

David Dalla Gasperina, a fan playing for $50,000 toward the purchase of a home, made a full-court putt during a break in the first half. The contest was sponsored by a local mortgage company.

The Blazers and the Rockets play the second of back-to-back games against each other on Saturday.