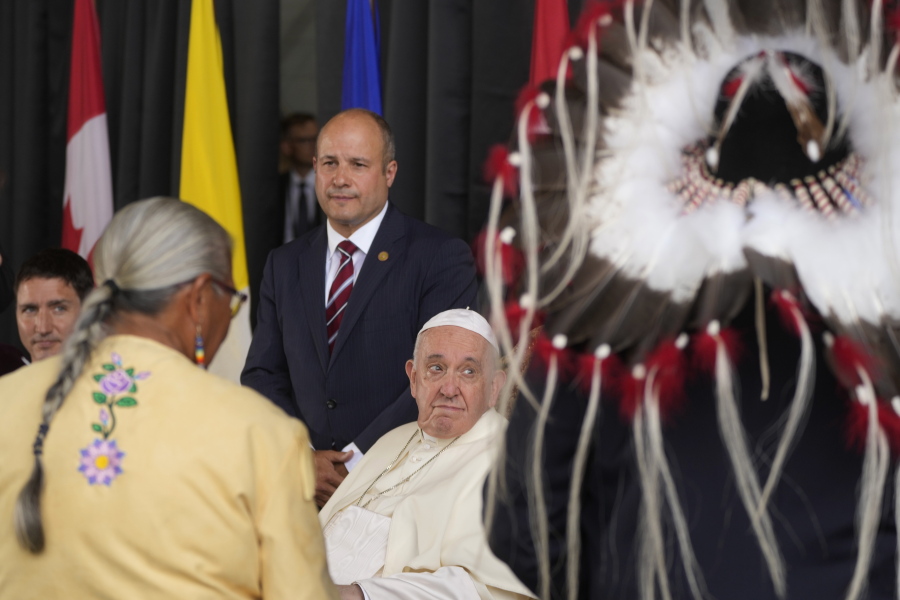 MASKWACIS, Alberta (AP) — Pope Francis arrived Monday at the site of a former Indigenous residential school to deliver long-awaited apology for the Catholic Church’s role in Canada’s policy of forcibly assimilating Native peoples into Christian society that led to generations of trauma and abuse.

Under a steady drizzle, thousands of school survivors, Indigenous elders and their family members arrived at the site of the former Ermineskin Indian Residential School, now largely torn down.

As survivors told the crowd of their personal stories and struggles, one of the hosts of the event, Chief Randy Ermineskin of the Ermineskin Cree Nation, waited for the pope in a nearby parking lot and took stock of the historic import of the day.

Francis was to pray at a cemetery near the Ermineskin Indian Residential School, now largely torn down, and then deliver remarks to thousands of school survivors, their families and other community members who gathered under a drizzling rain for the historic apology.

On arrival Sunday in Albert’as capital, Edmonton, Francis was greeted by representatives of Canada’s three main Indigenous groups — First Nations, Metis and Inuit — along with political and church dignitaries. At the welcome ceremony, Francis kissed the hand of a survivor of a residential school, Elder Alma Desjarlais of the Frog Lake First Nations, a gesture of humility and deference that has he used in the past when meeting with Holocaust survivors.

The Canadian government has admitted that physical and sexual abuse were rampant in the government-funded Christian schools that operated from the 19th century to the 1970s. Some 150,000 Indigenous children were taken from their families and forced to attend in an effort to isolate them from the influence of their homes, Native languages and cultures and assimilate them into Canada’s Christian society.

Catholic religious orders operated 66 of Canada’s 139 residential schools, where thousands of children died from disease, fire and other causes.

Francis’ six-day trip — which will also include other sites in Alberta, as well as Quebec City and Iqaluit, Nunavut, in the far north — follows meetings he held in the spring at the Vatican with delegations from the First Nations, Metis and Inuit. Those meetings culminated with a historic April 1 apology for the “deplorable” abuses committed by some Catholic missionaries in residential schools.

The first pope from the Americas was determined to make the trip, even though torn knee ligaments forced him to cancel a visit earlier this month to Africa. Francis, 85, has called it a “penitential pilgrimage” to help the Catholic Church reconcile with Native peoples and help them heal from what Canada’s Truth and Reconciliation Commission has said was “cultural genocide.”

That same commission report called on Francis to apologize for the abuses on Canadian soil, a request he is fulfilling with the trip.

Thousands of children died from disease, fire and other causes. The discoveries of hundreds of potential burial sites at former schools in the past year has drawn international attention to the legacy of the schools in Canada and their counterparts in the United States.

Maskwacis, about an hour south of Edmonton, is the hub of four Cree nations.

Event organizers said they would do everything possible to make sure survivors can attend the event. Many will travel from park-and-ride lots, and organizers acknowledge that many survivors are elderly and will require accessible vehicles, diabetic-friendly snacks and other amenities.

Catholics operated a majority of the Canadian schools, while various Protestant denominations operated others in cooperation with the government.

As part of a lawsuit settlement involving the government, churches and approximately 90,000 surviving students, Canada paid reparations that amounted to billions of dollars being transferred to Indigenous communities. Canada’s Catholic Church says its dioceses and religious orders have provided more than $50 million in cash and in-kind contributions, and hope to add $30 million more over the next five years.

Prime Minister Justin Trudeau, who last year voiced an apology for the “incredibly harmful government policy” in organizing the residential school system, will also attend the Maskwacis event along with other government officials.

In Maskwacis, the former school where Francis is visiting has been replaced with a school system operated by the four local Cree nations. The curriculum affirms the Indigenous culture that was once suppressed.

Chief Greg Desjarlais of the Frog Lake First Nation in northern Alberta, a school survivor, said after the pope’s arrival Sunday that there are “mixed emotions across this country” over his visit.

“I think today of the young people that didn’t make it home and are buried around residential schools,” he told a news conference after the airport welcome ceremony. But he expressed optimism that the visit can begin to bring reconciliation.

On Monday afternoon, Francis is scheduled to visit Sacred Heart Church of the First Peoples, a Catholic parish in Edmonton oriented toward Indigenous people and culture. The church, whose sanctuary was dedicated last week after being restored from a fire, incorporates Indigenous language and customs in liturgy.

“I never in my life thought I would see a pope here at Sacred Heart Church,” said Fernie Marty, who holds the title of church elder. “And now we get that opportunity.”

When Francis visits, the church will display the clothing, bread and other supplies it regularly provides to the needy, including many of Edmonton’s estimated urban Indigenous population of 75,000.

The visit will be an “encounter” that will help “for people to know what we are, who we are,” said its pastor, the Rev. Jesu Susai.