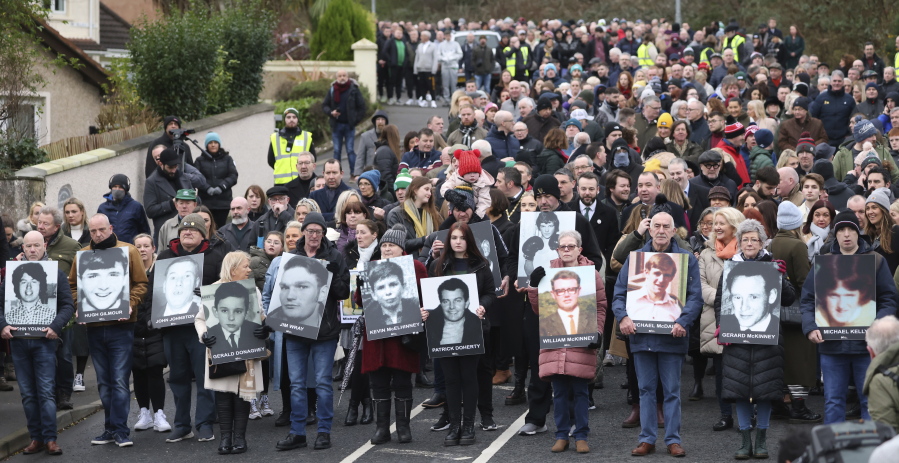 LONDON — Hundreds of people gathered Sunday in Northern Ireland to mark 50 years since “Bloody Sunday,” one of the deadliest days in the conflict known as The Troubles.

Thirteen people were killed and 15 others wounded when British soldiers fired on civil rights protesters on Jan. 30, 1972, in the city of Derry, also known as Londonderry.

Relatives of those killed and injured half a century ago took part in a remembrance walk Sunday, retracing the steps of the original march. Crowds gathered at the Bloody Sunday Monument, where political leaders including Irish Premier Micheal Martin laid wreaths in a ceremony.

The names of those who were killed and wounded were read out during the 45-minute memorial service.

Britain’s government apologized in 2010 after an official inquiry found that the soldiers fired without justification on unarmed, fleeing civilians and then lied about it for decades. The report refuted an initial investigation that took place soon after the slayings that said the soldiers had been defending themselves against Irish Republican Army bombers and gunmen.

Prime Minister Boris Johnson told Parliament on Wednesday that Bloody Sunday was “one of the darkest days in our history” and that the country “must learn from the past.”

One former British soldier was charged in 2019 in the killing of two of the protesters and the injury of four others. But prosecutors decided last year not to proceed with the case because there was no longer a prospect of conviction. Families of one of the victims have brought a legal challenge against that decision.

Martin, the Irish leader, said Sunday that there should be full accountability in all legacy issues.

“I don’t believe this will be any amnesty for anybody,” he said after meeting with the families of victims. “It is important because time is moving on too for many, many families and families need closure.”

Michael McKinney, whose brother William was among the victims, criticized the British government’s plans to make it harder to prosecute military veterans for alleged offenses committed years earlier.

“They are trying to deny us justice because they are scared to face justice. But we want to send a very clear warning to the British government. If they pursue their proposals, the Bloody Sunday families will be ready to meet them head on,” McKinney said.