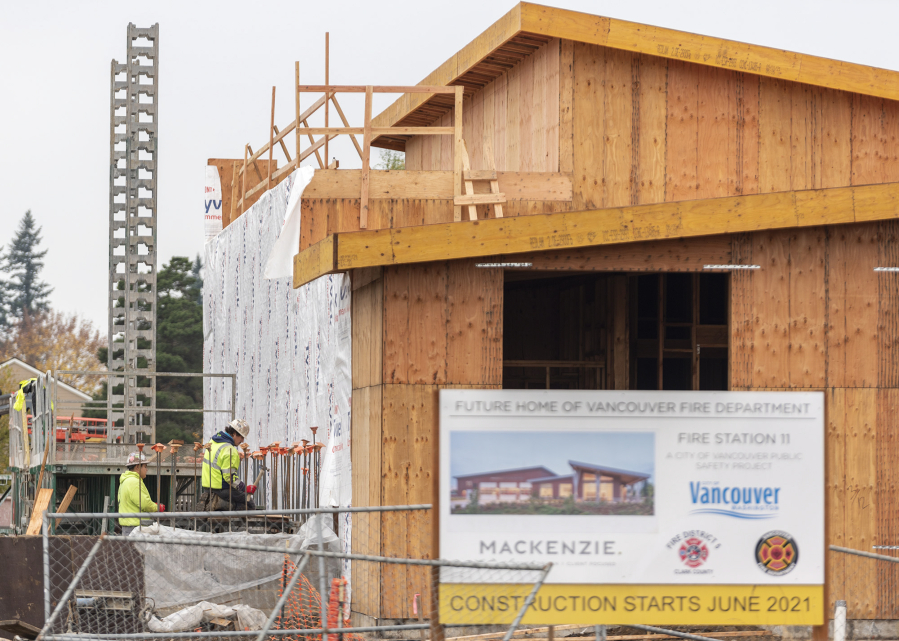 Fire Station 11, a building effort to improve public safety and aid future growth, is currently on schedule to be completed in the coming year.

Nathan Leek, support services and strategic planning deputy chief, said the new 15,000-square-foot station is projected to be finished in fall 2022. All the concrete and foundational work has been completed, he said. Construction crews are working on wall framing and essential weatherproofing to prepare it for winter.

The facility lies immediately outside of Vancouver city limits at 9606 N.E. 130th Ave. within Clark County Fire District 5, which is served by the Vancouver Fire Department. The $7.1 million building was modeled after the department’s Fire Station 2 at 2106 Norris Road.

It is expected to heighten emergency response capabilities in Orchards and Sifton — an area facing some of the slowest responses in the fire department’s coverage zone.

“(Station 11) fills a small need, but there is a lot more that needs to happen,” Leek said.

Adding the new station fills a gap between fire stations 4 and 7. There will be one fire engine with a three-person crew to serve the area, he said, and the facility will have enough space to include another engine and crew in the future.

This will alleviate call concurrence and shorten emergency response times, which the department is struggling to get under 7 minutes and 59 seconds. With 182 line staff and more than 250,000 people served, the strain is noticeable.

When the station plan was initially approved, it was scheduled with an existing crew. However, low staffing levels are still a concern within the fire department, Leek said. It is a large factor contributing to the lower performance rate.

Sifton resident Christie BrownSilva said she believes the additional fire crews are needed to add relief to her community. She saw two structure fires occur in her neighborhood within a short time. This, along with the community’s medical emergencies and traffic accidents, concerns her.

“It’s really booming out here,” BrownSilva said. “There is definitely a need that is increasing.”

Station 11 isn’t the only construction effort involving the fire department. A 2012 study identified necessary upgrades for stations 5, 8 and 9 to comply with seismic building standards and an engineering analysis must be done to assess the projects further. Stations 3 and 4 will eventually be replaced to adhere to essential infrastructure criteria, Leek said.

These construction and renovation efforts, along with more staffing, will improve system resiliency in the future, he said.