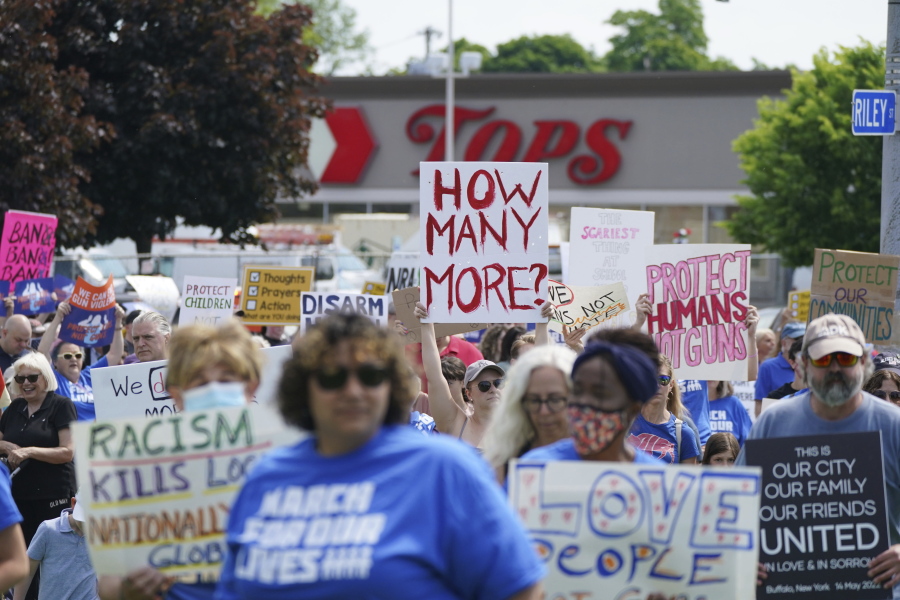 WASHINGTON — The new federal law passed in response to a series of mass shootings includes provisions to better incorporate juvenile records into the federal background check system, but states vary greatly in the way they approach access to guns and the background checks themselves.

As states navigate the new law, they will face pressure from critics who view gun-related scrutinizing of juvenile records as unfairly penalizing people for youthful mistakes.

Sen. John Cornyn of Texas was the chief Republican in the bipartisan Senate gun negotiations that arose after 18-year-old Salvador Ramos committed the horrific mass shooting at Robb Elementary in Uvalde, Texas, that left 19 children and two teachers dead.

Cornyn looked for areas where the system failed in Uvalde — and found many — but particularly seized on the challenge presented by those who buy guns shortly after their 18th birthday, as Ramos did.

“Right now, the criminal background check system doesn’t look back before you were 18 to see whether you had a mental health adjudication or some disqualifying criminal conviction,” Cornyn said during floor debate on his proposal. “That’s a problem.”

In retrospect, Ramos displayed plenty of warning signs in the form of violence to animals and threats to others, although it’s not clear whether any of that disturbing behavior resulted in official records that would have set off alarms in a background check.

Federal law bars gun purchases by anyone convicted of a crime punishable by imprisonment for a term exceeding one year.

Other prohibited individuals fall into various categories: those who have renounced their U.S. citizenship, been dishonorably discharged, are in the country illegally, use illegal drugs or are a fugitive from justice.

Also prohibited are individuals who have been convicted of a misdemeanor domestic violence offense and anyone who “has been adjudicated as a mental defective or committed to a mental institution.”

Cornyn has been adamant that he would not support proposals unduly burdening the Second Amendment rights of law-abiding citizens and said he resisted calls for additional prohibited categories.

“We essentially are, by doing what we’ve done here, saying that we are going to make sure that existing law is enforced but not add additional requirements,” he said of the juvenile records provisions in the new law.

Cornyn said the bill incentivizes states to upload juvenile records they have to the National Instant Criminal Background Check System to ensure any disqualifying convictions or mental health interventions are available.

In his view, those people already were prohibited from buying guns under previous laws.

“This is, to be clear, not an expansion but a clarification,” Cornyn said.

In part because of the potential technical challenges to folding juvenile records into NICS itself, the new law includes an enhanced review for those under 21.

Authorities will have an opportunity to extend their background probes to 10 days for those under 21, rather than the typical three days, in part so they can look into juvenile records.

Some gun rights groups objected to the new law for a host of reasons, including the juvenile records provisions.

Aidan Johnston, director of federal affairs at Gun Owners of America, raised the prospect of a person involuntarily committed as a juvenile who is blocked from owning a gun as an adult.

He also said expanding the records included in NICS searches is likely to increase the rate at which individuals are incorrectly blocked from purchasing a firearm.

Johnston agreed that anyone convicted of a felony in adult court is supposed to be in the system. But he said if states are failing to upload such records, that shouldn’t require a new law or what he described as an unconstitutional review period for those under 21.

As legislative director for the Texas State Rifle Association, Andi Turner focuses more on state gun laws than federal, but she questioned holding the missteps of minors against them as adults.

Turner said she understands that some young people might display troubling signs, such as hurting animals.

“Should the police or social services look into it? Sure, absolutely,” Turner said. “But do I think we (should) take away constitutional rights of adults without due process? I do not.”

Supporters of the juvenile record provisions say criminal records captured by them would typically be those who were tried and convicted in adult court when they were under 18.

Those records already should be uploaded to NICS, but states have interpreted the law in such a way that they don’t always, according to those backing the change. When it comes to mental health issues, the new law calls for looking back at records only as far as age 16.

There are avenues for people to have their gun rights restored, but those processes can vary greatly from one state to another.

Critics have described the enhanced review period, which would sunset after 10 years, as a federally mandated waiting period, but Cornyn disputed that, saying many background checks are resolved in a matter of hours.

And the senator said sometimes the FBI needs more time to investigate. For example, he said it might be initially unclear whether a misdemeanor assault conviction was the result of a bar fight that does not prevent the person from getting a weapon or a disqualifying case of domestic violence.

More time was an issue in the case of Dylann Roof, who killed nine people at Mother Emanuel Church in Charleston, South Carolina, in 2015, Cornyn said.

Despite having recently admitted to drug possession, Roof was able to purchase his gun based on a provision that says sales can proceed after three days even if the background check is not complete.

Dru Stevenson, a professor at the South Texas College of Law who has researched gun violence prevention and firearm regulations, said the current system has a two-pronged issue.

On the front end, some state officials don’t upload records that might be relevant for a background check. On the back end, the quality of a background check can depend partly on the resourcefulness of the person running it.

“The FBI will have to develop some new internal procedures in response to the new law, and instruct their staff accordingly, and it’s too soon to know how that will work,” he said. “And if the (Texas) Legislature fixes this, or the (Texas attorney general) does so with an opinion letter, that would make the back end part less important because the information will be there in one location already.”

Cornyn acknowledged the role of states during his floor speech ahead of the final Senate vote on the measure. He said states approach the issue differently and the federal government has no way to compel states.

“I would think that governors and state legislatures would want to work with us to try to keep guns out of the hands of people who we know are a threat to themselves and a threat to public safety,” he said.