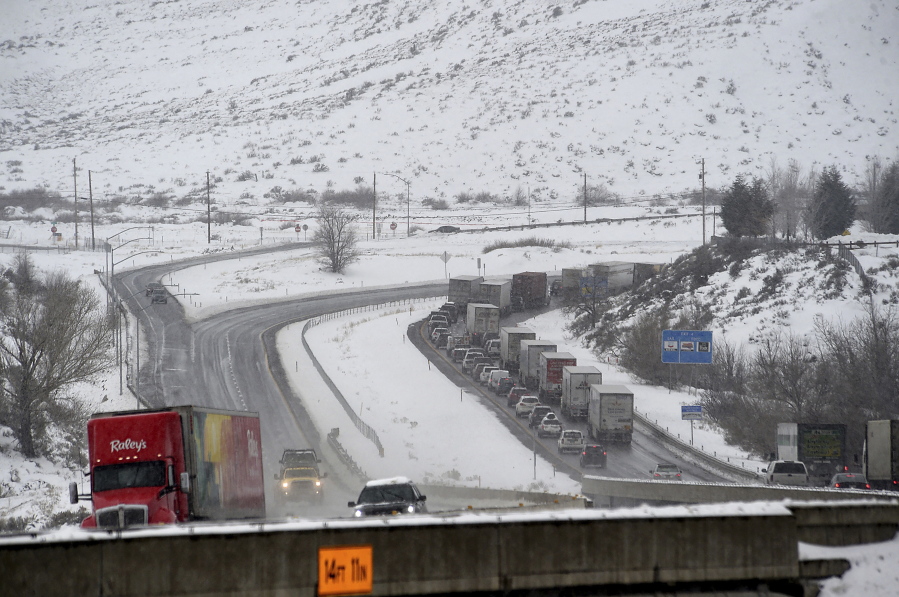 SEATTLE — Another blast of snow halted travel on a large portion of the main east-west highway across Washington state Thursday and also snarled traffic in the Seattle and Portland-metro areas.

Authorities closed about 80 miles (129 kilometers) of Interstate 90 over the Cascade Mountains “due to near zero visibility and adverse road conditions.” There was no immediate estimate as to when the interstate would reopen.

A storm that moved in overnight dumped up to 3 inches (7.6 centimeters) in parts of Seattle and even more outside the city. Snoqualmie Pass east of Seattle, which is what I-90 runs over, saw more than 9 inches (23 centimeters) of new snow, according to the state transportation department,

In the Portland area and southwest Washington state, up to 4 inches (10 centimeters) of new snow was possible.

Temperatures in western Washington and Oregon were hovering around the freezing mark, considerably warmer than the past several days when the mercury hit the single digits in some areas after extreme cold air from Canada’s Fraser River Valley blew in Sunday.

Airflow from the Pacific will blow in on the weekend and cause temperatures to rise to more seasonable highs in the 40s Fahrenheit (4.4 Celsius).

In Southern California, drenching rains fell and snow brought traffic to a halt on a major highway early Thursday as the last in a series of December storms that walloped the state moved through.

The Grapevine section of Interstate 5 high in the mountains north of Los Angeles was shut down due to snow and ice before dawn, the California Highway Patrol said.

The storm brought widespread worries about flooding and debris flows from wildfire burn scars in the region.

Northern California was finally mostly free of storm warnings, but chains were required on major highways through the Sierra Nevada due to icy conditions.

Residents in higher foothill and mountain communities were digging out, with reports of major tree and power line damage in places like Foresthill and the Nevada City area, both northeast of Sacramento.

Thousand of residents remained without power, with warnings that some could be without lights and heat for another week.