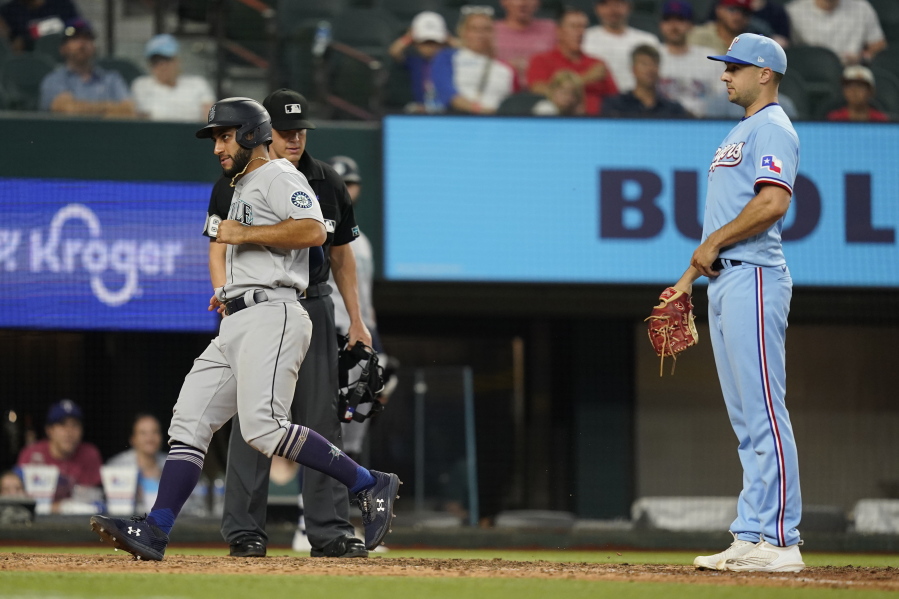 ARLINGTON, Texas (AP) — Abraham Toro scored on a wild pitch by Brock Burke in the 10th inning to complete Seattle’s late-game rally over the Texas Rangers 6-5 on Sunday.

Seattle scored three in the ninth off Matt Bush, who had his third blown save this season, to tie the score 5-5. Ty France began the scoring with a one-out solo home run that landed just inside the right-field foul pole.

Diego Castillo (3-0) pitched a scoreless ninth inning for Seattle, and then in the 10th, Toro, an automatic runner, advanced to third base on a groundout by Dylan Moore and scored on ball four to Adam Frazier from Burke (3-1).

Paul Sewald pitched a scoreless 10th to earn his fourth save in six opportunities this season.

Eugenio Suarez had four RBIs for the Mariners, who have won the first two series of a nine-game trip. He had a solo home run in the fourth inning and a two-run double lined to right field in the ninth that tied the game.

“We had the right guy up at the right time,” Mariners manager Scott Servais said of Suarez, who has an eight-game hitting streak. “He’s a veteran guy who’s been in those positions. Our guys were locked in late, and that’s a credit to them. It was looking a little bleak there.”

Texas’ five runs were scored on home runs — including the first major-league homer for rookie Ezequiel Duran, who was recalled from Double-A Frisco before making his big-league debut on Saturday. Duran also singled in the second inning for his first hit in the majors.

The Rangers had the potential winning run at second in the ninth with one out before Castillo struck out youngsters Duran and Steele Walker. Walker appeared in his first big-league game after being promoted from Triple-A Round Rock and went 0 for 4.

“We talk about not getting caught up in the moment,” Woodward said. “It’s hard to tell younger guys that in the moment. They’ve got to go through it.”

Rangers starter Martin Perez came in leading the major leagues with a 1.42 ERA. He allowed two runs, raising his ERA to 1.56. The New York Yankees’ Nestor Cortes took over the big-league lead (1.50).

It was Garcia’s fourth homer in his last eight games and Semien’s third in his last nine games after beginning his first Texas season with 43 homerless games.

Semien hit 45 homers last season with Toronto, the most ever by a primary second baseman in the major leagues.

Suarez’s first-pitch homer leading off the fourth inning ended a 69 1/3-inning homerless streak for Perez that began after the Yankees’ Gleyber Torres homered off him last Sept. 24 when he pitched for Boston.

Mariners CF Julio Rodriguez stole his 17th base, which leads the majors. … It was Semien’s 21st career home run against Seattle, his most against any opponent.

Mariners: LHP Ryan Borucki was in uniform for the Mariners for the first time after being acquired Saturday from Toronto for minor league INF Tyler Keenan. … INF Mike Ford was designated for assignment to make room for Borucki on the 40-man roster.