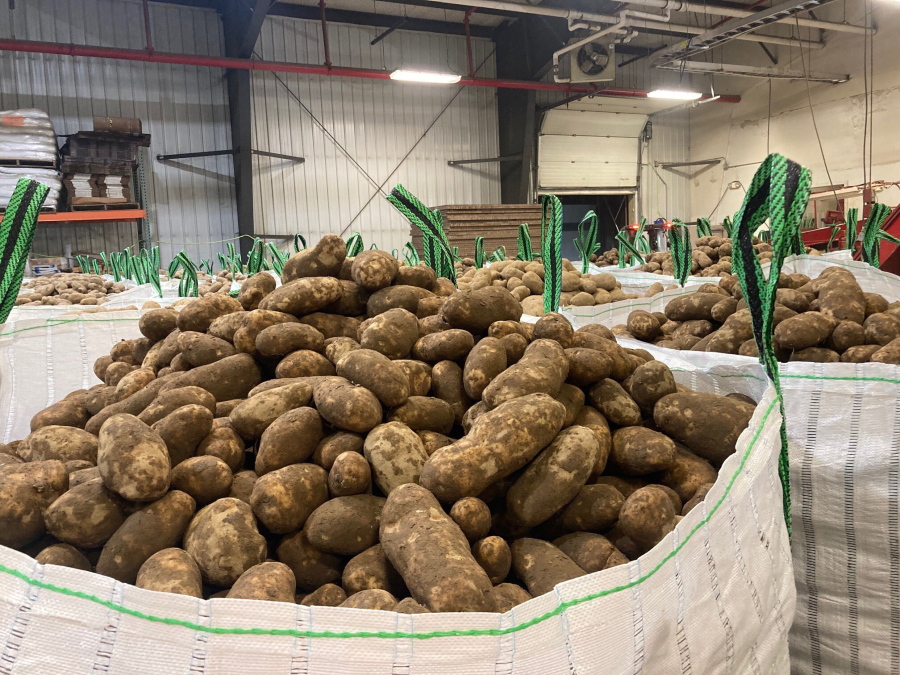 PORTLAND, Maine — Maine’s potato growers had such a bumper crop this past season that they stepped in to help their big brothers out west who were short on spuds.

Farmers from Maine shipped potatoes by rail for the first time in four decades this winter thanks to a strong harvest in the state and heat and dry weather that stymied farmers in renowned potato-growing states like Idaho and Washington. The potatoes made their way more than 2,500 miles for processing, riding in climate-controlled rail cars.

All told, 21 million pounds of potatoes, virtually all from growers in northern Maine, flowed through a rail-connected warehouse owned by LaJoie Growers LLC. That equates to more than 530 truckloads of potatoes, said co-owner Jay LaJoie.

“It’s a good chunk of potatoes,” said Don Flannery, executive director of the Maine Potato Board.

Most of the Maine potatoes went to processors in Washington state, where much of the french fries and other products are exported. The shipments to Idaho were seed potatoes, including Maine’s Caribou russet, that’ll be planted this spring.

Chris Voigt from the Washington State Potato Commission said processors were grateful for the potato shipments, but they’re hopeful that Maine growers’ services aren’t required in the future.

The shipments came to an early end about two weeks ago, party because of economic disruptions caused by the war in Ukraine. But it was good while it lasted, helping out potato processors in Western states while reducing an oversupply of Maine spuds.

It also proved the value of rail lines for agriculture, especially during a shortage of trucks in the pandemic, LaJoie said.

There’s no way growers could have sourced enough tractor-trailers to haul the potatoes, but there happened to be an available rail line that connects to a LaJoie-owned warehouse in Van Buren.

The shortage of truck drivers has contributed to supply-chain problems during the pandemic.

While Maine is known for its famous lobsters, the state was indeed once the nation’s potato capital through World War II. Other states stepped up production in the 1950s. Idaho and Washington State are currently Nos. 1 and 2, while Maine ranks ninth, according to the USDA.

The unusual shortage of potatoes out west is a result of weird summer weather. A heat wave with temperatures soaring above 100 degrees Fahrenheit hit the Pacific Northwest in June, just as potatoes were starting to grow. The result was reduced yields and lower quality, Voigt said.

“The plants sort of shut down,” he said.

The extreme heat reduced yields by nearly 10 percent for potato growers in Idaho and Washington, while Maine potato yields grew more than 30 percent thanks to good weather, according to the U.S. Department of Agriculture.

In northern Maine, the harvest was so big that growers scrambled to find storage. Some buildings at the former Loring Air Force Base were enlisted for a last-minute home for the abundant tubers.

In the end, it proved to be a successful pilot program for rail delivery that could be used again if unusual weather patterns persist, LaJoie said. Plus Maine enjoyed getting some attention for its potato industry thanks to the irony of David rendering aid to the potato Goliaths.