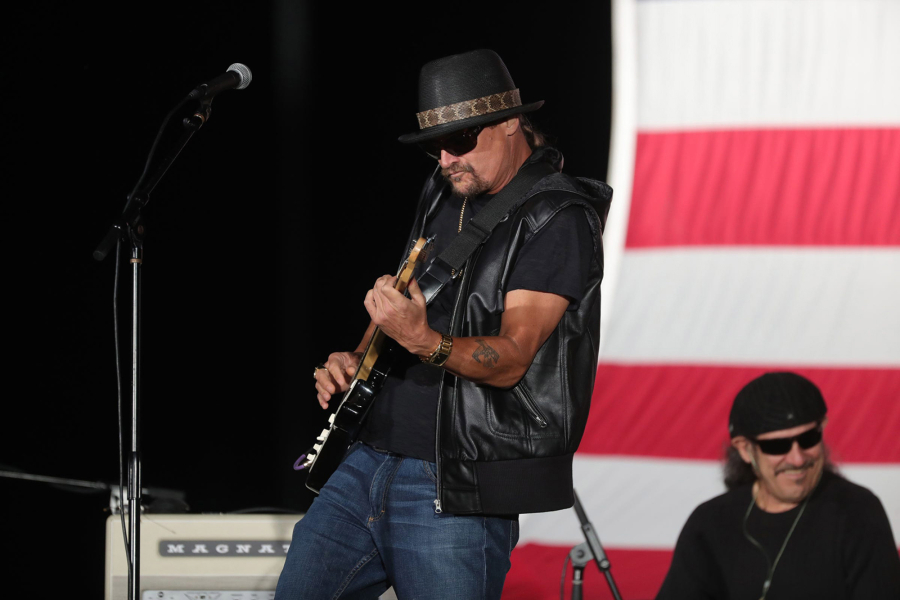 Kid Rock comes out swinging on his new song “Don’t Tell Me How to Live,” which was released digitally on Friday.

The hard-edged rock track, built around a piece of Canadian rock outfit Monster Truck’s 2015 song “Don’t Tell Me How to Live,” finds Rock back in defiant “Devil Without a Cause”-mode, rapping angrily over hard rock guitars about the backlash against him, what he sees as the softened state of the nation’s youth and his vices, bragging at one point, “I rip more lines than a 10-pound bass.”

“Every opinion has a millennial offended,” Rock says in the song’s second verse, after bemoaning the everybody-gets-a-trophy set. “But this Amendment One, it rings true/ and if you don’t dissent, (expletive), then see number two.” (He’s referring to the Second Amendment.)

A video for the song finds Rock, at one point wearing a T-shirt that reads “social media sucks,” clutching a bottle of booze and riding a flying middle finger over Mount Rushmore and into outer space.

The new single was teased online Thursday by Rock, who turned 50 in January, with a picture of him standing shirtless at a recording console with two middle fingers raised. “(Expletive) gets real this Friday,” read the post’s caption.

The “Don’t Tell Me How To Live” single art features the Statue of Liberty wearing a face mask.

The single marks Rock’s first new material since “Sweet Southern Sugar,” his 11th studio album, which was released in 2017. Led by the single “Po-Dunk,” the set debuted at No. 8 on Billboard’s Top 200 albums chart.

Rock drew swift backlash in 2019 after a video of him making comments about Oprah Winfrey while intoxicated at his Nashville, Tenn., restaurant was splashed across the web. After the fallout, Rock later decided against renewing the licensing agreement for his Kid Rock’s Made in Detroit restaurant at Little Caesars Arena.

In 2020, after the start of the COVID-19 pandemic, Rock released the playful, old-school hip-hop flavored “Quarantine” under the name DJ Bobby Shazam.