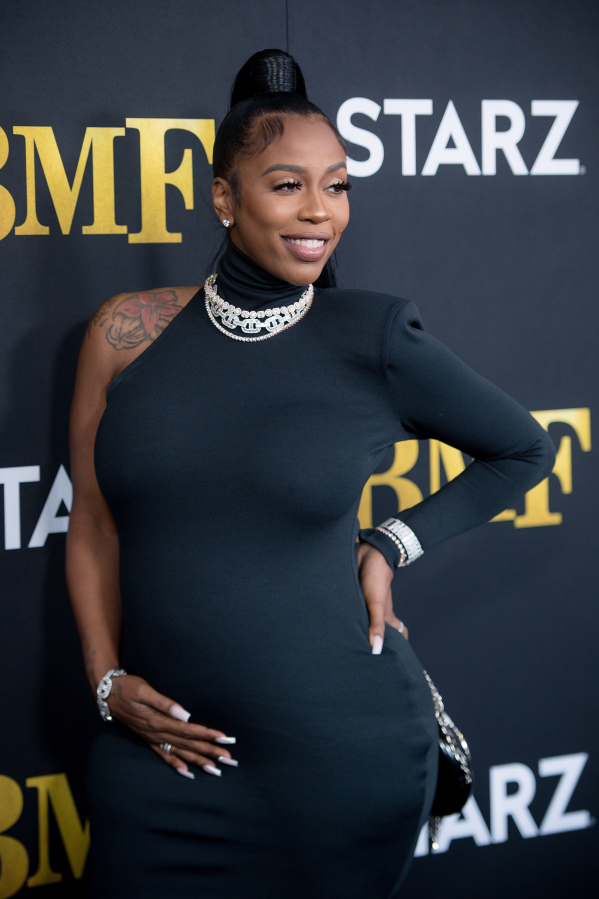 When rapper Kash Doll announced this month that she is expecting a boy, she did it with an Instagram photo taken on the Detroit Pistons center court at Little Caesars Arena.

Wearing a floor-length, Pistons-blue gown made by Hollywood Peezy Designs (and decorated with the team’s logo and former Pistons great Grant Hill’s last name and number 33), she looks regal as she tosses a basketball in the air and smiles a Mona Lisa smile.

It’s an appropriate outfit for the mom-to-be, an entertainment all-star who took a big leap in 2021 from music to acting with a co-starring role on “BMF.”

“BMF,” a gritty Starz drama set and partially filmed in the Motor City, follows the early years of Demetrius (Big Meech) Flenory and his brother, Terry (Southwest T) Flenory, brothers from southwest Detroit who grew up in poverty and became famous for — and eventually were convicted of — building a national drug-trafficking network known as Black Mafia Family.

Kash plays Monique, a paralegal and a young mother who is romantically linked to Big Meech (Demetrius Flenory Jr., the son of the real-life character) and his nemesis, Lamar (British actor Eric Kofi Abrefa). So far this season, Monique’s story line has put her in turmoil and her daughter, Zoe, in jeopardy when — spoiler alert! — Meech kidnapped Zoe in a strategic move against Lamar.

Kash, who was born Arkeisha Knight, spoke to the Free Press via Zoom recently in advance of the next-to-last episode of the first season.

Episode seven is big in terms of both the dramatic arc and fan interest. Directed by “BMF” executive producer Curtis (50 Cent) Jackson, it features an eagerly awaited cameo by Eminem, who was de-aged through visual effects to portray a teenage Richard (White Boy Rick) Wershe Jr.

Already renewed for a second season, “BMF” has given Kash, who has acted in a few small movies and appeared as herself on Fox’s “Empire, her most complicated role yet. But she considers Monique a relatable character, even with her complex love life.

“I don’t think Monique is complicated. You know why? Because Monique is realistic. I feel like people put on this whole perfect perspective on love life, when it’s not really like that in real life,” she says. “And Detroit women can vouch. A love life is not as easy and breezy as some people make it seem.”