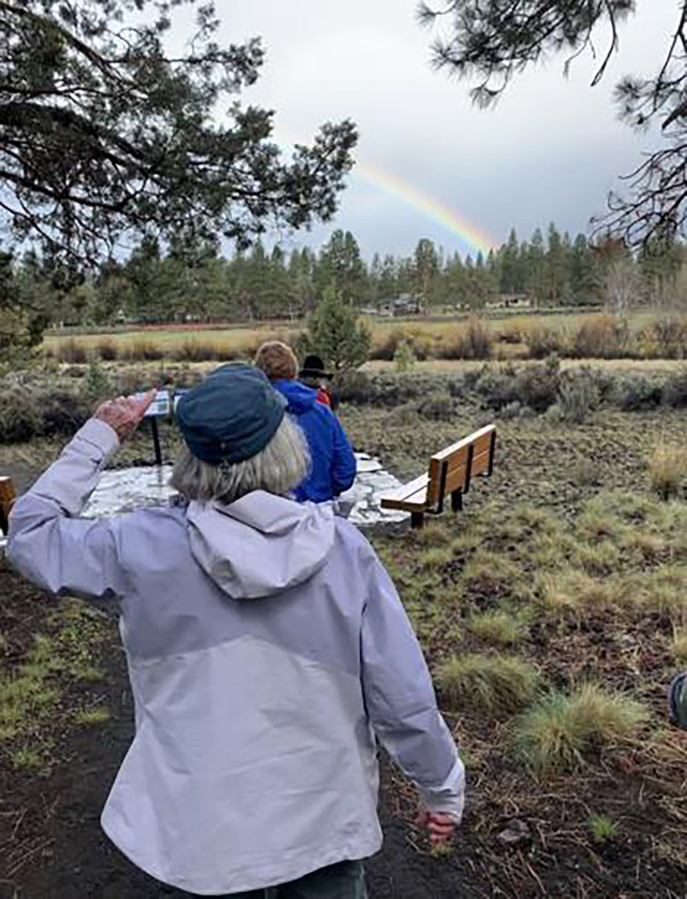 BEND, Ore. — I’m usually rushing around chasing after the next adventure.

But when I signed up for a bird walk early one rainy Saturday morning, I was reminded of the quiet beauty that exists in places I usually overlook. In just two hours, I became attuned to how a quiet meadow north of Sisters was a thriving home to over 10 species of birds.

As I peered through my binoculars I noticed the yolk-colored feathers of a warbler hiding in the sage flats, the erratic flight patterns of the female rufus hummingbird and the azure coloring of the California scrub jay.

Light rain fell from the sky as we walked the gravel trails of Indian Ford Meadow Preserve. Our tour guide, Carol Wall, reminded me to cover my binoculars with one arm to avoid rain spots on the lenses.

Given the number of beginner bird watchers in the group — myself included — she took a moment to explain the basics of using binoculars. She said to adjust them until a single circle was visible through the lens, rather than two.

“What shape is the beak? Is it V-shaped or needle-nosed?” Wall said.

She explained that by observing the beak, we could discern what the bird would eat. Wall drew on over 40 years of bird watching and 14 years of guiding experience with the Deschutes Land Trust to teach us how to tell one species from another, noting it was important to observe the bird’s behavior and color differentiation.

Each time we spotted a bird, Wall would pull out the iBird Pro app on her smartphone, displaying it to allow each of us a closer look.

As we neared the end of the paved path, a rainbow appeared in the sky. It was nature’s reward for pressing on despite the rainfall.

We continued in the direction of the sage flats. The rain grew heavier again, and I considered turning back. We hadn’t walked far and our vehicles were still within sight on the other side of Camp Polk Road.

Despite the chill seeping into my bones, I stayed. I didn’t want to miss the rest of the tour, an opportunity for a photograph or even worse — a rare bird sighting.

Had I left, I would have missed the opportunity to see a warbler, a rufous hummingbird and a vulture.