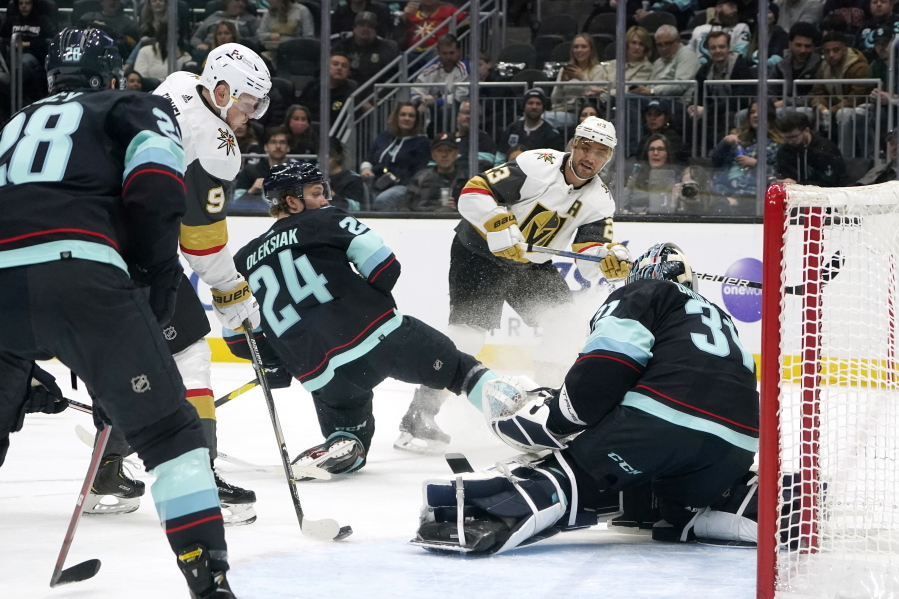 SEATTLE — Jack Eichel scored twice in his first multigoal game since being traded to Vegas, Logan Thompson made 26 saves and the Golden Knights beat the Seattle Kraken 5-2 on Friday night.

The Golden Knights, the previous NHL expansion team, swept the season series against the newest expansion team. Vegas beat Seattle in the season opener in October and shut out the Kraken 3-0 on Wednesday night.

Jonathan Marchessault and William Karlsson added empty-net goals in the final 2 1/2 minutes for Vegas. Marchessault’s was his 27th of the season and Karlsson’s his 10th.

The victory pushed Vegas back into a playoff spot in the Western Conference, one point ahead of Dallas for the second wild-card spot.

Evgenii Dadonov added two assists and has seven points for Vegas since the NHL voided the attempted trade by the Golden Knights that would have sent Dadonov to Anaheim at the trade deadline last month.

Alex Wennberg pulled Seattle within 3-1 at 10:44 of the third period with his ninth goal of the season off a great pass from Jared McCann. Kole Lind scored his first career NHL goal with 1:38 left following Marchessault’s empty-net goal.

Making his eighth straight start, Thompson was terrific when called upon, but great scoring chances were rare for the Kraken. Karson Kuhlman had two excellent chances for Seattle, missing the net open in front of the net in the first period and hitting the crossbar in the second period.

Eichel’s first came at 10:28 of the first after a bad defensive rotation allowed Alec Martinez to skate in and feed Eichel in front of net.

Just seconds after Kuhlman hit the crossbar in the second, Eichel scored his second of the game, finding himself alone in front of the net off a pass from Dadonov. Later in the second, Theodore was left unmarked racing down the center of the ice and beat Grubauer on the blocker side.

Eichel’s last multigoal game came more than two years ago while still with Buffalo in February 2020 against Pittsburgh. Eichel has four goals in his past four.

UP NEXT: Seattle hosts Dallas on Sunday.