Sounds like WA State Patrol will be able to draw blood from suspected DUI drivers right on the side of the road. A quick call to get a warrant and a Trooper who has now received the proper training can take a blood sample right there and then. No longer will they have to transport the driver somewhere else to get the procedure done.

Not sure what I think of a police officer sticking a needle into my arm but I guess that choice is mine. Don’t Drink & Drive!

If you have been unlucky enough to get a DUI you will be required to get an SR22 insurance filing to get your license back. And Mid-Columbia Insurance is your SR-22 specialist. Give us a call or use this form to request a quote. 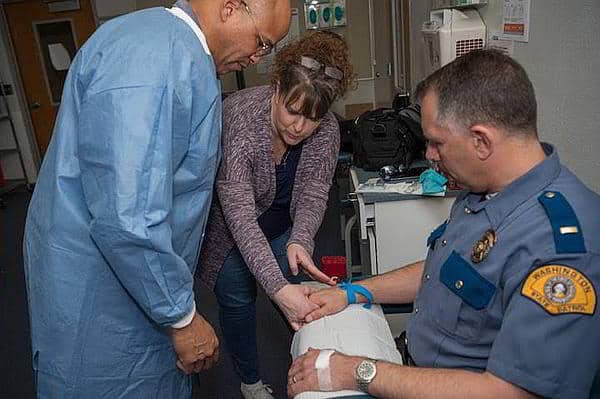 Olympia, WA – The Washington State Patrol (WSP) took another step in their goal to remove impaired drivers from Washington roadways. In an effort to make the DUI arrest process more efficient and reduce impacts to the healthcare system, the WSP started a pilot program where 21 troopers have been trained as licensed phlebotomists. These troopers now have the ability to conduct legal blood draws on suspects that have been arrested for DUI, where a search warrant from a judge has been issued.

The troopers attended an approved 50 hour course at Bates Technical College, and passed all the requirements to obtain the Department of Health (DOH) certification for Medical Assistant Phlebotomists. The troopers are assigned to Snohomish, Whatcom, King, Pierce and Thurston Counties. The 21 troopers that volunteered to attend this training did so as additional duties, to help in the effort to make our roads safer. The WSP hopes to expand the program in the future.

Lieutenant Bruce Maier, Commander of the Impaired Driving Section stated “we are very excited to start our phlebotomy program. This is a significant accomplishment for these troopers and our agency as we look for improved ways to combat impaired driving in WA State. These dedicated troopers spent many volunteer hours studying and preparing for this certification. We look forward building on the success of these troopers”.

The first blood draw conducted by the newly trained troopers occurred May 6th in Tacoma. Trooper Williams, who had received his certification two days prior was asked to assist a fellow trooper with the blood draw of a suspect arrested for DUI.

Prior to this program, a suspect arrested for DUI where a warrant for blood is obtained would have to go to a healthcare facility to have a licensed phlebotomist or other trained person conduct the draw. Having troopers trained and certified will reduce this impact on hospitals and clinics, and get troopers back out on the road in a timelier manner.

**Photos were taken during training, and prior to the Stay at Home order***

Give our insurance professionals a call today at (509)783-5600 or click “Get a Quote” to request a quote on your insurance.  At Mid-Columbia Insurance, our goal is to get you the coverage you want at a price you can afford!