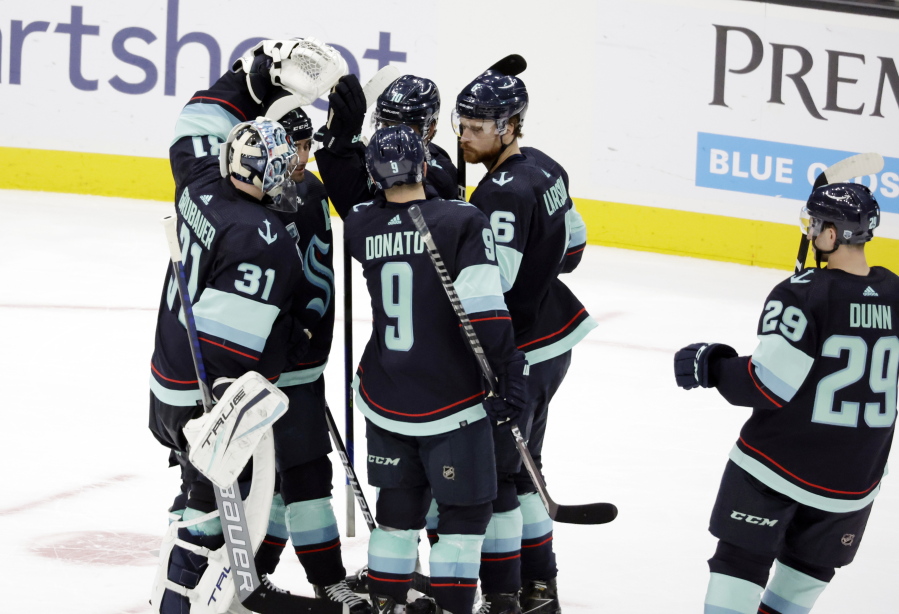 SEATTLE — Ryan Donato scored in the shootout for Seattle and New Jersey missed all three of its attempts, with two them saved by Phillip Grubauer, as the Kraken beat the Devils 4-3 on Saturday night.

Rookie Matty Beniers scored his first NHL goal, which gave Seattle a 3-2 lead at 16:57 of the second period. Will Borgen and Carson Soucy also scored for the Kraken, who snapped a two-game skid.

Jesper Bratt, Jesper Boqvist and Damon Severson scored for New Jersey, which lost its second in a row after winning the first two games of a five-game Western Conference road trip.

The Kraken went first in the shootout, with Donato getting Nico Daws to move to his right, and Donato then went around Daws’ left and tucked it into the net.

Grubauer then saved Tomas Tartar’s shot. After Beniers hit his try off the left post, Grubauer stopped Bratt’s shot. Daws saved Daniel Sprong’s try, leaving the Devils with one more chance to tie it. But Yegor Sharangovich sent his shot off the right post — ending the game.

Beniers, the No. 2 overall choice in last year’s draft out of Michigan, made his NHL debut Tuesday at Calgary. He recorded an assist in a 5-3 loss.

His goal Saturday came on a power play and gave the Kraken a 3-2 lead at the 16:57 mark of the second period. Defenseman Vince Dunn, playing on the left wing side, ripped a shot from the blue line that slammed off the inside of the post. The puck dribbled through the blue paint toward the right side, and Beniers rushed in to sweep it into the net past Daws.

Through regulation and overtime, Grubauer and Daws each made 23 saves.

Severson had tied it at 3 at 4:55 of the third, lifting a shot from the inside edge of the right circle over Grubauer for his 11th.

The Devils built a 2-1 lead in the first period on Bratt’s 25th goal of the season and Boqvist’s eighth — sandwiched around Borgen’s goal that tied it at 1.

NOTES: Beniers’ power-play goal ended an 0-for-16 Kraken drought with the extra man that was in its ninth game Saturday. … Bratt’s game-opening goal for New Jersey was the 200th point of his career. All 200 have come with the Devils, who drafted him in the sixth round in 2016. … The Devils went 0 for 3 on the power play Saturday. They are 0 for 24 in their last nine games and 1 for 35 in their last 10 road games.

UP NEXT: Kraken host the Ottawa Senators on Monday night.