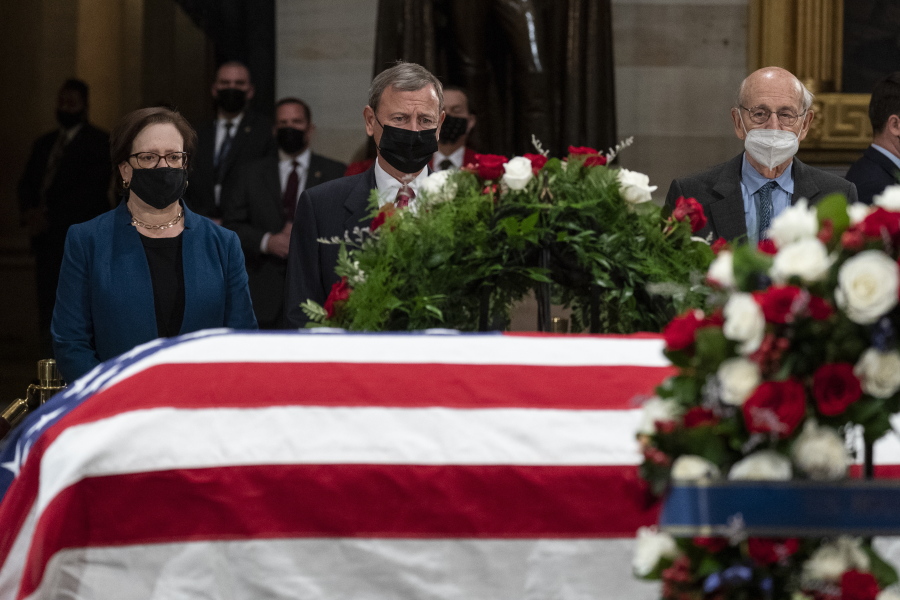 WASHINGTON (AP) — Bob Dole was being honored with a private service at Washington National Cathedral and a public one at the World War II Memorial on Friday, after lying in state at the U.S. Capitol, where President Joe Biden and top leaders from both parties saluted a “giant in our history.”

A friend of Dole’s from the decades both men spent in the Senate, Biden is set to speak at Friday’s invitation-only cathedral ceremony, which will feature the late Kansas senator’s family and close friends.

Dole’s casket was then set to travel to the World War II Memorial on the National Mall for a public “celebration of life” featuring Gen. Mark Milley, chairman of the Joint Chiefs of Staff, actor Tom Hanks and the U.S. Army Band. Dole’s wife, former North Carolina Sen. Elizabeth Dole, plans to lay a wreath in his honor.

Dole, who died Sunday at age 98, served nearly 36 years in Congress, more than a decade as GOP Senate leader and was his party’s presidential nominee when he lost to Bill Clinton during the 1996 election. In February, he announced he’d been diagnosed with stage 4 lung cancer.

Besides his sharp, often sarcastic tongue, among Dole’s best-known attributes were his pragmatic brand of politics and self-deprecating wit — representing the sense of common civility and compromise of a bygone era.

“As divided as we are, the only way forward for democracy is unity — consensus — the only way,” Biden said Thursday. “We may follow his wisdom and his timeless truth and reach consensus on the basic fundamental principles we all agree on.”

Dole’s casket, draped with the American flag, sat under the Capitol dome. Biden said Dole “belongs here, in this place, this temple to liberty and temple to possibility.”

“He, too, was a giant of our history,” the president said.

Dole’s body will later travel to Kansas, where weekend events include a public viewing at St. Mary Queen of Angels Catholic Church in his hometown of Russell. He will later be interred at Arlington National Cemetery.

“No question, Bob Dole left this world a much better place because of his legacy of leadership and service,” Mike Ford, chair of the Gerald R. Ford Presidential Foundation and the late President Ford’s eldest son, said in a statement. “As we read the obituaries and see the responses to his passing, my family is struck by the genuine affection expressed across the political spectrum. His warmth, wit, and wisdom will be sorely missed.”

Ford selected Dole as his running mate while unsuccessfully seeking to hang on to the presidency in the 1976 election.

Thursday’s Capitol service wasn’t open to the public, but political leaders and other guests were able to stop by, including Dan Quayle. The former vice president touched Dole’s casket and said “Bye, buddy.”

Black draperies hung on doorways under the dome as Dole lay in state and the lectern was positioned in a way that the statue of another Kansas stateman, Dwight Eisenhower, would be seen in the background. Sen. Mitch McConnell, now the longest-serving Republican Senate leader, said Dole idolized Eisenhower, calling the former president and general a hero who embodied “the finest qualities of the American people.”

“We can say with certainty that Eisenhower isn’t the only Kansan who meets those standards,” McConnell said in a speech earlier this week.

McConnell had raised concerns that an event planner for the memorial service, Tim Unes, had been subpoenaed by the House committee investigating a mob’s deadly Jan. 6 attack on the Capitol over his role in planning that day for former President Donald Trump, according to a person granted anonymity to discuss the private conversation. Trump had urged his followers to head to the Capitol to fight the certification of Biden’s election victory.

Dole family spokesperson Steve Schwab said in a statement that Unes, a former Dole campaign staffer, had “volunteered his time to serve on the advance team for this week’s memorial events.” Schwab said Elizabeth Dole “was previously unaware” of Unes’ participation in the January attack and once he made her aware she “terminated his volunteer role.”

Born a child of the Dust Bowl, Bob Dole suffered paralyzing and near-fatal wounds after being shot in World War II that sent him home with a severely damaged right arm that he could not use to shake hands. Instead, Dole held a pen in it and reached out with his left as a way to put greeters at ease.

He served as a Kansas state legislator before running for Congress in 1960, joining the House for eight years then going on to win the Senate seat. The 1996 race was Dole’s third and final White House campaign.

Dole’s sense of humor was on display after losing to Clinton. McConnell recalled that when it was time for Dole’s remarks, he stood at the podium and began: “I, Robert J. Dole … do solemnly swear … oh, sorry, wrong speech!”

But that humor was rarely seen on the campaign trail, where it could have helped him win more votes. Instead, Dole was seen as a GOP “hatchet man,” a mentee of Richard Nixon and chairman of the Republican National Committee during the Watergate era.

Still, it was during Dole’s long Senate career that he grew to see the value of reaching across the aisle to Democrats and secured his more lasting achievements — most notably the Americans with Disabilities Act that to this day ensures a level of accessibility as a civil right.