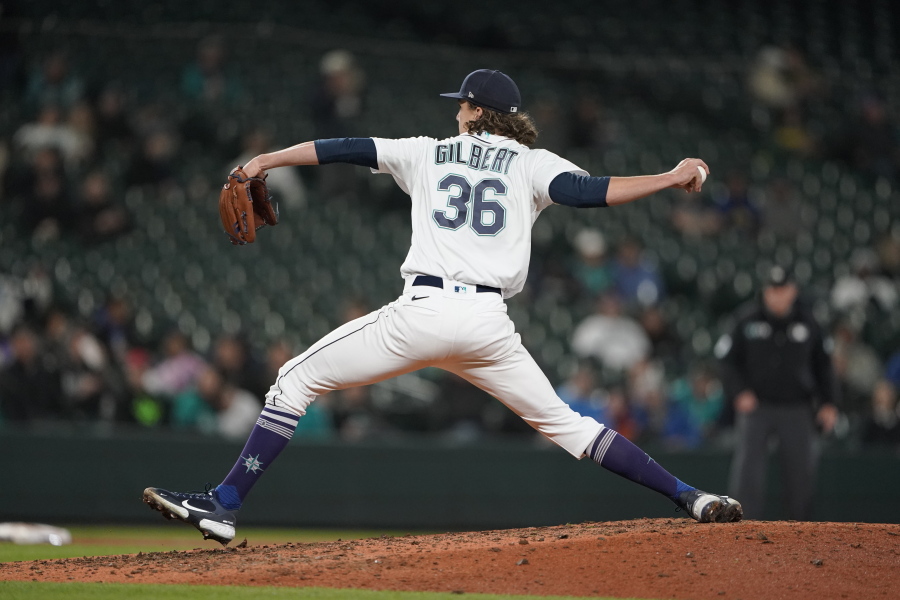 SEATTLE — Logan Gilbert pitched 6 2/3 scoreless innings and Adam Frazier doubled twice on a three-hit night to lead the COVID-hit Seattle Mariners over Texas 4-2 Wednesday night and send the Rangers to their worst start since 1987.

“That’s special,” Negrón said. “I mean, I didn’t know this was going to be happening today. I always envisioned this as a possibility somewhere in the distant future or something like that. But no, it’s a great group of guys. The staff is amazing. The players are great, and thanks to all of them and thanks to skip. He was chatting with me all day.”

While the Mariners have won six of seven and improved to 7-5, Texas has lost five straight and seven of eight. The Rangers, who turned a triple play in the first inning, are off to a 2-9 start that is their worst since opening 1-10 in 1987.

Texas has lost seven straight to the Mariners and 18 of its last 20 at Seattle.

Gilbert (2-0) allowed six hits, struck out four and walked none, lowering his ERA to 0.54. But he acknowledged something was a bit off during the outing.

“It was kind of weird,” Gilbert said. “I honestly don’t think I had my best stuff. I had things that worked good enough, I guess, but I wouldn’t say anything was just like nails. But it was at times good enough.”

Texas manager Chris Woodward lamented the bad breaks that are mounting for the reeling Rangers.

“There’s just a couple of mistakes … we made a few mistakes and we got in our own way,” Woodward said.

Seattle went ahead in the third when Toro doubled and scored on first baseman Nathaniel Lowe’s fielding error.

Ty France’s RBI single chased Dunning in the fifth after the first of Frazier’s two doubles. Jesse Winker singled against John King, who loaded the bases with a walk to Eugenio Suárez. J.P. Crawford followed with a sacrifice fly, and Julio Rodriguez singled up the middle for a 4-0 lead.

Frazier and France, the Nos. 1 and 2 hitters in the Mariners lineup, combined to reach base six times and scored twice. Toro also had two hits.

“I don’t think there’s an easy way out of this lineup when you’re pitching against us right now and it’s a good spot to be in,” Mariners left fielder Jesse Winker said.

Things were looking promising for the Mariners in the first inning after Dunning walked Frazier and France singled. Winker hit a 100.9 mph liner to Lowe, who ran to first and stepped on the base, then threw to shortstop Corey Seager at second.

It was the Rangers’ seventh triple play and the first since Aug. 16, 2018, against the Los Angeles Angels. The previous triple play in the majors was turned by the New York Yankees last June 20 against Oakland.

“That’s what we were talking about in the dugout,” Negrón said. “We were like, ‘What are the odds that was going to happen in the first game that you managed.’ But that’s a tough read.”

Rangers: Manager Chris Woodward said RHP Spencer Howard will return from the 10-day injured list on Friday and make his second start of the season at Oakland. Spencer had a blister and split fingernail that forced him out of his second start of the season. He went on the IL on April 14, retroactive to April 11. Howard gave up six runs on six hits in three innings in his no-decision debut.

Rangers: LHP Taylor Hearn (0-1, 4.70) will pitch on four days’ rest Thursday to close out the series with the Mariners. He pitched 3 2/3 innings while giving up six hits and five runs in a loss to the Los Angeles Angels on Sunday.