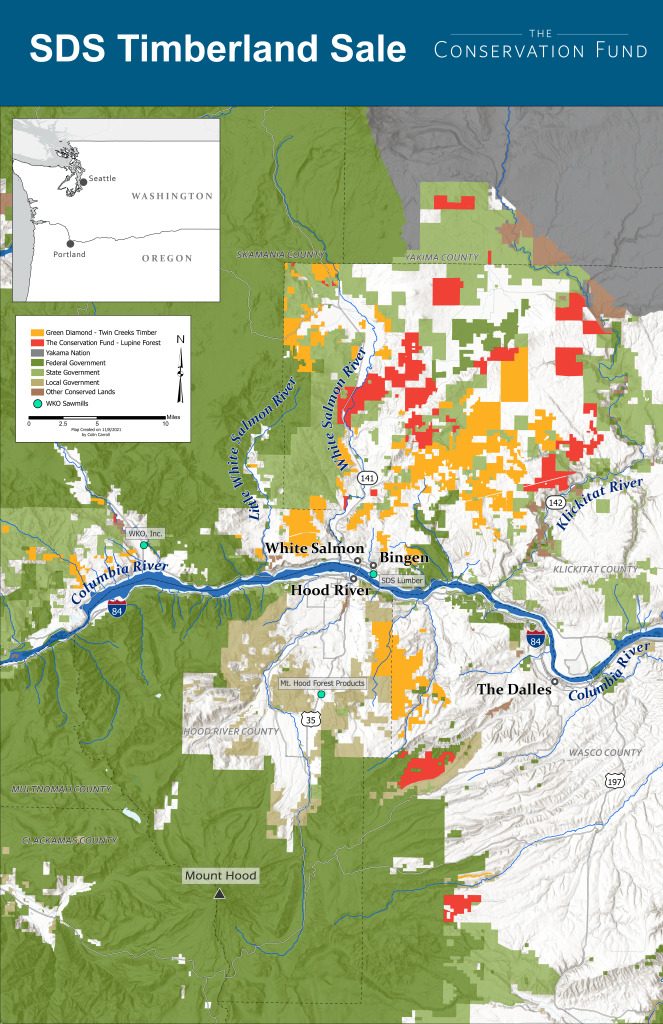 A large scattering of small pieces of timberland in the Gorge is under the ownership of a new group called the Conservation Fund. The new ownership plans to conserve and restore the beautiful lands accessible by hiking trails.

The Conservation Fund purchased 35,000 acres of sloped oak forests, rivers and streams, Ponderosa pine, and other microclimate lands from the SDS Lumber Company and SDS Co. on Nov. 17.

Evan Smith, senior vice president of the Conservation Fund, said that for years, hikers and residents of nearby towns have feared the land would be sold to an owner who would make it inaccessible or cut the trees.

“The local communities know it really well,” Smith said. “This has been in SDS ownership for 50-plus years. It has had harvesting on it, but it’s one of the best ‘stocked’ – biggest trees and volume per acre – that’s come on the market that I can remember.”

The price of the sale was not disclosed, but the purchase of the land marks a big win for the biodiversity of the Gorge, which is threatened by climate change upsetting a region full of microclimates.

Cherie Kearney, forest conservation director for the Columbia Land Trust, said the purchase is a “huge deal to see such a big part of the landscape for sale.”

“This is the heart of where we’ve dedicated our conservation commitment,” she said.

Kearney and the Columbia Land Trust plan to work toward gaining state and federal grants, and to eventually purchase much of the land from the Conservation Fund.

“To have willing owners to say they’re interested in working on those strategies is huge for the landscape,” she said.

The land is broken into small, scattered chunks that are mostly in Klickitat County. Some parcels lie in Skamania and Yakima counties in Washington, and in Hood River and Wasco counties in Oregon.

“That’s how a lot of timberland has been assembled over the years,” Smith said. “A little here and a little there.”

The 35,000 acres adds to the Virginia-based Conservation Fund’s growing portfolio of more 500,000 acres in the United States.

The seller of the land, SDS, also sold parts of nearby forestland to Seattle-based Silver Creek Capital’s fund Twin Creeks Timber, and Carson-based WKO. In total, SDS sold more than 96,080 acres to the three groups.

The Columbia Land Trust is also working with Silver Creek, which is interested in cooperating to develop more sustainable forestry practices, Kearney said.

The trust also plans to purchase development rights from Silver Creek’s land to ensure the land remains forest and is not developed.

“We’ve been very successful with that in other places,” she said.

Some of the lands touch the Klickitat River. Free-flowing with no dams, it is the longest of such rivers in Washington at more than 90 miles.

Even today, you can watch “fishing on platforms thousands of years old,” said Kearney. Species include steelhead, salmon and Pacific lamprey.

The river is also world-class for kayaking, with year-round Class 5 rapids.

Kearney, who visits the area regularly for birding, said there’s a deep delight in seeing animals in the habitat, such as a warbler that migrated from Central America to the oaks of Oregon.

About 10 years ago, a mountain goat swam the Columbia River, as tracked with a radio collar. It traveled north along the Klickitat River before the collar’s GPS failed near Mount Adams.

Kearney said having land where wild animals can travel such lengths is a crucial part of the land that the new ownership can ensure.