The City of Vancouver is advancing its positive direction to achieve the leading-edge climate action goals it endorsed in 2021. On Monday, June 6, following in-depth analysis and discussion, Vancouver City Council unanimously approved an amended version of the City’s Climate Priority Resolution that calls for adopting some of the most ambitious goals in the nation, including: 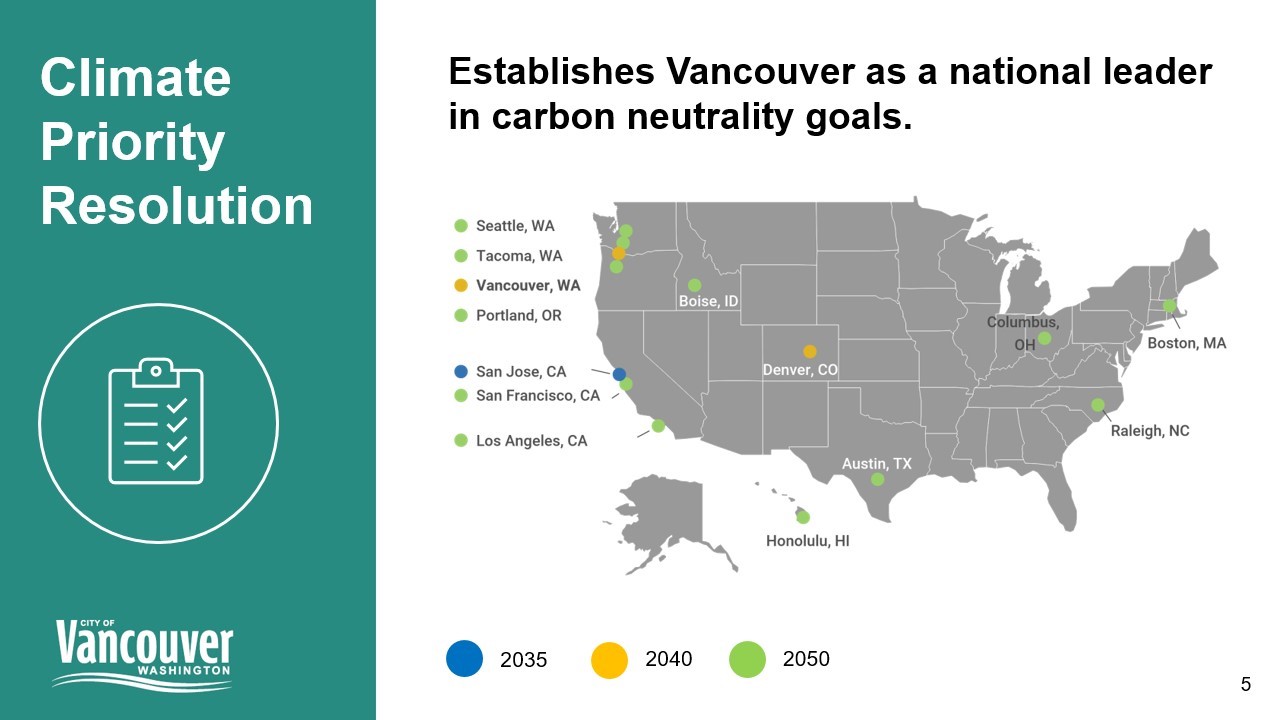 The Climate Priority Resolution directs the City Manager to develop a Climate Action Plan (CAP) which defines the strategies and actions necessary to achieve this climate action goal. It will also provide needed guidance and direction for City staff as they approach initiatives such as the City’s Strategic Plan and the Interstate Bridge Replacement Program.

The resolution is the final item to be advanced in the City’s 13-item early adoption package of climate initiatives identified in 2021. City staff detailed progress on the other 12 items of the package during a City Council workshop in March.

“This City Council’s approval of the resolution is a significant leap ahead in our journey to achieving our aggressive climate action goals,” said Aaron Lande, Vancouver’s policy and program manager. “The science continues to show us that what we’re doing is happening a little too slowly, and we need to pick up the pace in our move to carbon neutrality.”

The Climate Priority Resolution adopts clear greenhouse gas reduction pathways around which the CAP will be constructed and establishes City climate goals that can strengthen competitiveness for state and federal grants and other funding opportunities.

The resolution also declares Council’s intention to center youth and communities that experience the most immediate and worst impacts of climate change in the implementation and oversight of the CAP, and to conduct regular updates and refinements to the CAP to continue making progress towards its 2040 goals.

“Approving this resolution is a big step forward for the City and will have an impact on everything we do,” City Manager Eric Holmes said. “It’s the first time for City Council to officially make a definitive, unanimous statement about where we want to go as a City, and we’re looking forward to the journey ahead.”

Next steps for moving towards the adoption of a final CAP include extensive outreach and community engagement. A City Council workshop to walk through the final CAP draft is scheduled for early August, with a public hearing and vote on CAP adoption to follow one week later.