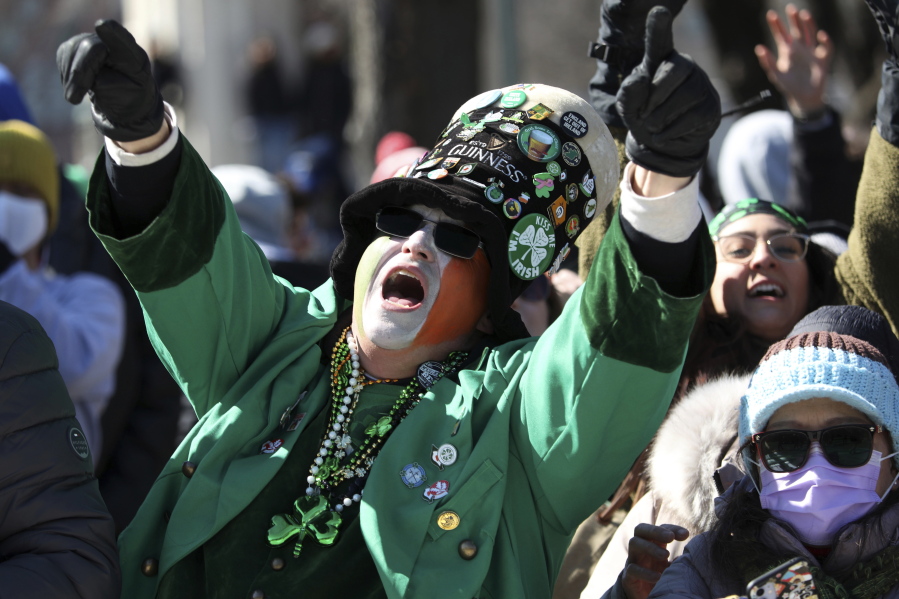 CHICAGO — A tradition originating over six decades ago was welcomed back to downtown Chicago Saturday after the city’s St. Patrick’s Day parade was canceled the past two years because of the COVID-19 pandemic.

Thousands of Chicagoans and guests of the city dusted off their best green attire and accessories and layered up to brave the cold to watch as parade cars, floats and more filed on by down Columbus Drive Saturday afternoon.

Earlier Saturday, crowds gathered around the Chicago River between Orleans Street and Columbus Drive – almost three-quarters of a mile, a much wider area than years past – to see it turn its signature brilliant green in celebration of the holiday.

In keeping with tradition, the dyeing and parade take place the Saturday before St. Patrick’s Day, which falls on Thursday this year, unless the holiday itself falls on Saturday.

The river dyeing tradition celebrated its 60th anniversary this year, but last year’s dyeing was also significant as residents and visitors of the city were surprised when the river glowed green after the parade was once again canceled. Both the river dyeing and the parade, which is in its 65th year, didn’t happen in 2020 after Lightfoot canceled the events.

Mia Sanchez, 12, and Solimar Rivera, 12, are both in sixth grade at St. Gall School. The girls walked in the parade with family on behalf of the local nonprofit Big Shoulders Fund. It was Sanchez’s first time in the parade this year, while Rivera said she’s been participating in the parade since she was 5 or 6.

Sanchez said last year was actually the first year she “really wanted” to take part in the parade, but it was canceled for the second year in a row.” She said she usually celebrates St. Patrick’s Day but was even more so excited to celebrate this year with everyone at the parade.

“Being a part of this community and marching with everyone, I love it,” Sanchez said.

Rivera said she was “really upset” when the parades of the last two years were canceled because being in the parade has become a tradition for her and her family. In lieu of the parades, Rivera and her family would still dress up in green and celebrate in front of their house by wishing people and giving out candy to passersby.

Sanchez and Rivera said they are “definitely” looking forward to coming back next year.

Cousins Rhea Allen, of Stonington, Illinois, and Shannon Lewis, of Tennessee, said they’ve “got the Irish in us,” are spending the weekend in the city and saw the river dyeing and parade for the first time. Allen said it was “spectacular watching the river turn that bright green color,” while Lewis added, “It was cold, but it was fun.”

Lewis said it’s her first time visiting Chicago and wants to plan a trip back when it’s warmer because she feels she hasn’t “even touched the tip of the iceberg on everything to go around here.”

“Life is back to normal,” Lewis said. “It feels good to see everyone out and celebrating.”

Brothers David Rocas and Manuel Rocas along with their friend Gorje Dacosta are visiting Chicago from Luxembourg. The group, who said they are all Portuguese, said their first time celebrating St. Patrick’s Day in Chicago was so far a success starting with the river dyeing in the morning and continuing with the parade.

David Rocas said he was in Chicago two years ago for St. Patrick’s Day when the event ended up getting canceled due to the pandemic, and he had to “fly back all of a sudden because Trump was closing down the airports.”

Fast forward to Saturday, David Rocas along with his brother and friend finally got to see Chicago’s St. Patrick’s Day festivities for the first time.

“I’ve been in Dublin before also for the holiday,” David Rocas said. “It’s really big. This does compare. It’s fun.”

They said before Chicago, they were in New Orleans celebrating Mardi Gras. The trio all said they would return to the city for St. Patrick’s Day in the future “with pleasure.”

“It’s great to see everybody smiling on the streets,” David Rocas added. “Everybody’s having fun.”