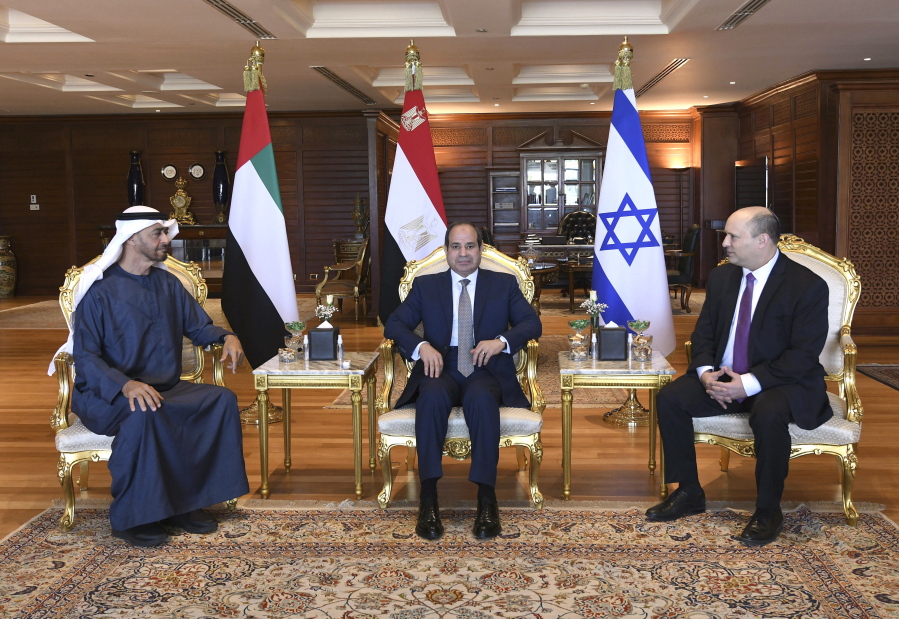 JERUSALEM — U.S. Secretary of State Antony Blinken will try to use his three-nation tour of the Middle East and North Africa to reassure wary Israelis and Arabs that the Biden administration is committed to the region’s security at a time when Washington is confronting multiple foreign policy challenges.

U.S. preoccupation with Russia’s invasion of Ukraine and bolstering NATO’s presence in Eastern Europe has fueled concerns that America’s attention may be stretched thin. Indeed, Blinken’s trip was rescheduled several times due to developments in Ukraine, and he arrived late Saturday in Israel from Warsaw after breaking off from President Joe Biden’s Ukraine-dominated visit to Belgium and Poland.

Blinken’s visit also comes as talks over salvaging a landmark nuclear deal with Iran are winding down amid fears in Israel and among Gulf Arab nations that an agreement may not be tough enough to curb Tehran’s regional aggressiveness.

Israel was strongly opposed to the 2015 agreement between Iran and world powers and welcomed then-President Donald Trump’s decision to unilaterally withdraw from the deal. Israel has warned against reviving the agreement and says it will not be bound by any new one.

Underscoring regional anxieties, Israel’s government has hastily arranged a meeting of top diplomats from Arab countries that have normalized relations with Israel.

In addition to Blinken and Israeli Foreign Minister Yair Lapid, their counterparts from Bahrain, Morocco and the United Arab Emirates will attend. Those three countries normalized relations with Israel in 2020 in the so-called Abraham Accords brokered by the Trump administration.

Israel’s Foreign Ministry announced Saturday that Egypt, the first Arab state to recognize Israel, would also send its foreign minister to the gathering at a kibbutz in the Negev Desert, where Israel’s founding father, David Ben-Gurion, spent his retirement years. The two-day summit is to begin today, according to the ministry.

An official involved in the planning said the gathering was the first of its kind in terms of the large number of Arab partners to be hosted by Israel. He said shared concerns about Iran and the nuclear deal were sure to be part of the discussions with the Americans. The goal was to bring together moderate Arab partners to discuss a vision for “how the region moves forward” together with the United States, said the official, who was not authorized to publicly discuss details of the meeting.

The Biden administration has welcomed the Abraham Accords, one of the few Trump foreign policy initiatives it has praised, and expressed interest in negotiating additional ones despite a frosty reaction from the Palestinians. They have watched unhappily as Arab nations recognize Israel while their own conflict with Israel remains unresolved.

The U.S. has repeatedly said it supports a two-state resolution to the Israeli-Palestinian conflict, and after seeing Israeli Prime Minister Naftali Bennett in Jerusalem, Blinken will meet Palestinian President Mahmoud Abbas in Ramallah, on the West Bank, to reaffirm that position.

While Iran and the uncertain status of the nuclear negotiations in Vienna may be the issue of most immediate concern to Israel and its neighbors, the war in Ukraine and efforts to persuade Russian President Vladimir Putin to end the invasion loom large.