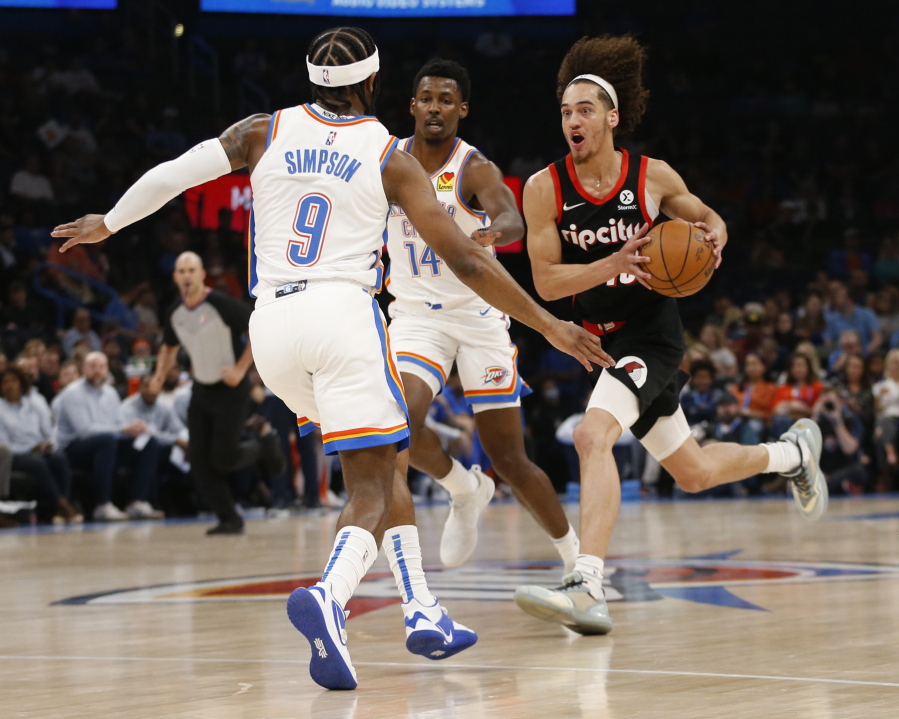 Hoard, who plays for the Thunder’s G-League affiliate, signed a 10-day NBA contract on April 1 and had 11 points and a career-high 20 rebounds that night against Detroit.

He took it up a notch against Portland, posting just the seventh game of at least 20 points and 20 rebounds for a Thunder player. He got water dumped on his head during the initial television postgame interview.

“It was special,” Hoard said. “Just seeing the guys are happy for me — felt really good about it.”

“That Jaylen Hoard kid — he played his behind off, man,” Billups said. “We couldn’t do anything about him the entire night, the entire game. He took advantage of everybody that was in front of him. You’ve got to give him credit.”

The Thunder improved to 4-0 against the Trail Blazers this season.

Keon Johnson scored 18 points and Greg Brown III and Ben McLemore each had 17 for Portland, which lost its eighth straight after leading by 19 at one point.

“Momentum is everything in this league, and the minute you let off the gas or become a little complacent, a team can take advantage of you,” Billups said. “You’ve got a lot of hungry guys out there on their team that’s in similar position to our guys. They don’t get a chance to play that much. So when they do, they want to take advantage of it, and they were just hungrier than we were in the fourth quarter.”

The Trail Blazers led 82-67 heading into the fourth quarter, but Oklahoma City held Portland to 12 points on 5-for-19 shooting in the final 12 minutes.

“I mean, impressive effort on those guys’ part,” Thunder coach Mark Daigneault said. “Played a lot of minutes, grinded that one out, and I thought the best defense we played all night came at the last part of the game.”

Both teams sat their key players. Both have records among the league’s worst and neither is in the playoff hunt.

Portland led 54-48 at halftime. Brown led the way with 12 points. Oklahoma City trailed despite shooting 51% in the first half.

Trail Blazers: Former Thunder coach Scott Brooks is an assistant for Portland. He was shown on the big screen late in the first quarter, and it drew a cheer from the crowd. Brooks led the Thunder to the 2012 NBA Finals. … G Kris Dunn had seven points, eight rebounds and eight assists.

Thunder: The Thunder started Kalaitzakis and Simpson. The Thunder announced Tuesday that both signed 10-day contracts via the NBA’s Hardship Allowance. Kalaitzakis hurt his right leg in the fourth quarter and did not return. Simpson finished with 10 points and five assists.

Trail Blazers at the New Orleans Pelicans on Thursday.