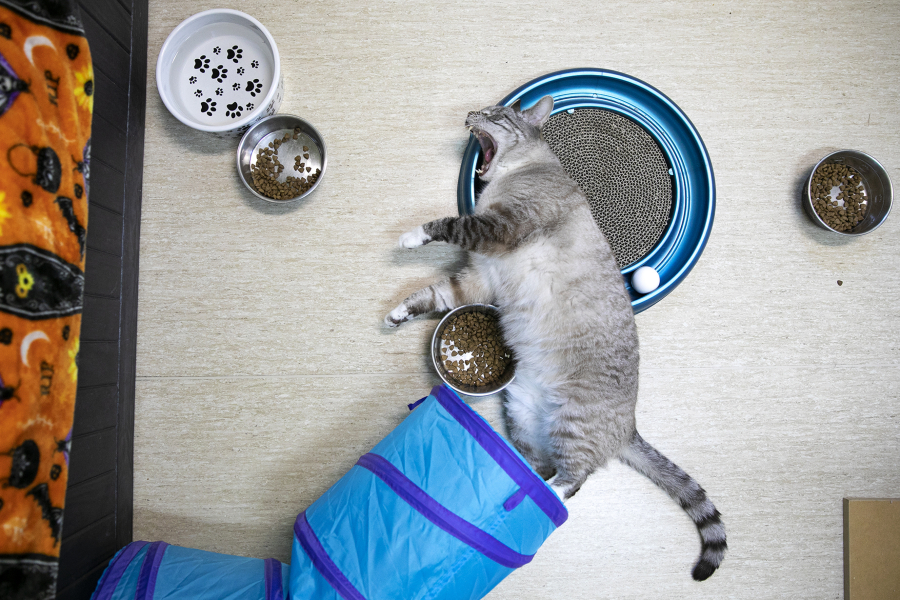 ARLINGTON — On a sunny July day, an orange cat named Billy parked himself in his favorite shady spot in the cat tunnel. A black cat named Douglas Furr approached, waiting for Billy to move. The orange tabby looked up nonchalantly, content to stay put.

That’s the tranquil setting at Purrfect Pals, a cat sanctuary and adoption center that has operated for 34 years in Snohomish County with a mission of eliminating euthanasia. Purrfect Pals cares for 100 cats and kittens with a focus on felines with special needs.

The sanctuary is on 5 acres off McRae Road southwest of Arlington, a quiet place for kitties to live out their lives or wait for adoption. Outdoor enclosures called “catios” allow plenty of space to roam.

“We take cats they don’t have time or resources to help,” she said. “We get a lot of senior cats or those that have early kidney failure or a chronic illness.”

Billy, age 2, and Douglas Furr, 4, are residents of the “Leukemia Land Sanctuary,” which houses cats positive for feline leukemia virus. The disease affects between 2 percent and 3 percent of cats in the United States. Other rooms house cats with kidney issues or those on a weight loss diet.

Olson credits Purrfect Pals with helping bring down the euthanasia rate. In 1997, a national survey found 71 percent of cats entering shelters were euthanized, according to American Humane.

Today, about 90 percent of cats entering shelters in Washington have positive outcomes, according to data from Shelter Animals Count. Olson said rescue groups like Purrfect Pals have made a difference by pulling out special needs cats and kittens from community shelters.

Kathy Centala founded Purrfect Pals in her basement in Brier in 1988.

“I started because I was aware a lot of animals were going into shelters and never came out,” said Centala, now 80.

A cat lover since childhood, she cared for cats by day and worked an airline reservations job by night. She advocated for spaying and neutering, which she said was not a priority at the time.

The shelter became a nonprofit in 1990. Three years later, Centala relocated the sanctuary to the Arlington-area property, a former horse ranch. Two buildings were converted to cat living quarters. A two-car garage became the clinic.

As the sanctuary grew, it needed to fundraise.

“I was totally poor,” Centala said. After researching grants at the library, she called up Nordstrom, the department store chain. She received funding from Bruce and Jennie Nordstrom, who became longtime donors and cat foster parents.

Purrfect Pals has only continued to expand.

“I knew I wasn’t going to give up or quit,” Centala said. She is now retired, living in a studio apartment at the sanctuary, with her one-eyed cat named Took.

Today, Purrfect Pals has a staff of 20 and an annual budget of $2.2 million. Its biggest fundraiser is the annual Black Cat Ball, which brings in about $250,000.

A 2017 expansion added new cat housing and an adoption lobby. Now, plans are underway for an 1,800-square-foot clinic for surgeries and dental work, administering vaccines and labs. The $2.5 million project will triple the size of the existing clinic.

The sanctuary has a network of about 60 cat foster families and is looking for more. In addition, there’s a foster dads program at the Monroe Correctional Complex, which pairs up cats in need of socialization with inmates.

Purrfect Pals has rolled with pandemic-era changes. It switched to appointment-only adoptions, which has been a positive, Olson said. Clients spend more one-on-one time with cats and the animals are less stressed, she said. Cats all have online profiles.

When COVID-19 began, the nonprofit stopped most off-site adoptions. Only the Renton PetSmart adoption center remains open. While adoptions dipped overall, there was a surge in adoptions in spring 2020. In April, a total of 40 cats were adopted, up from 21 the previous year, according to Purrfect Pals.

“We emptied out the whole shelter when we shut down, even the leukemia-positive cats,” Centala said.

Olson said adoption returns have not increased, even as many have gone back to work. She said cats are more independent than dogs and can deal with their owner being gone for hours.

Purrfect Pals does guarantee it will take back cats who need a new home, for reasons such as allergies, the death of an owner or cats not getting along. Even if a kitty ends up in a shelter out of state, Olson said, Purrfect Pals will bring it back to Snohomish County.

“Once a cat comes here,” she said, “we’ve committed to it for life.”